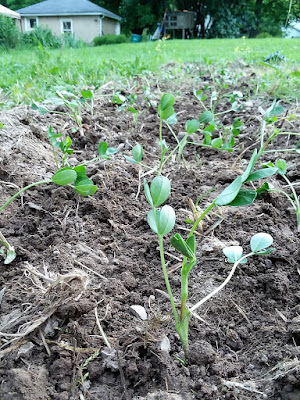 That title really makes it sound like we know what we're doing.  We don't.  But we are having a lot of fun.

My grandpa grew peanuts in his garden when I was little.  This was years and years ago... probably like 30 years ago.  I remember helping him pull the plants up and being shown how the peanuts grew in the ground and being mightily impressed by the whole thing.  Treats that grew underground? Who knew?  It was like a magic trick.  I don't know what variety of peanuts he planted (Grandpa was a very adventurous gardener and would save seeds from pretty much anything to see if he could grow them)  but I do still have a baggie of them that he gave me about 5 years ago  This was a man that never threw anything out.

Suspecting that 30 year old peanuts wouldn't have the greatest germination rate, I sprung for a packet of these from Baker Creek Heirloom Seeds when we put in our spring order. 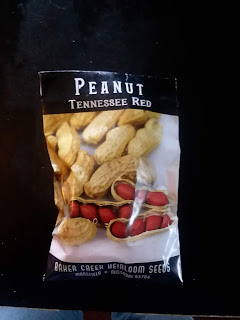 We're growing Tennessee Red peanuts.  When we opened the packet I was a little disappointed to see how few pods there were but then we started shelling them. 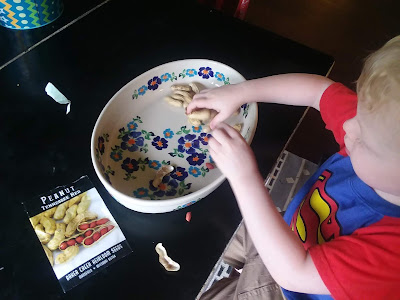 Or rather he did.  There's a new rule around the house called Don't do anything that the oldest is capable of doing for you/learning about. He shelled all of the peanuts, insisted on washing and drying the shells and then we counted the peanuts together.  There were 50 seeds. 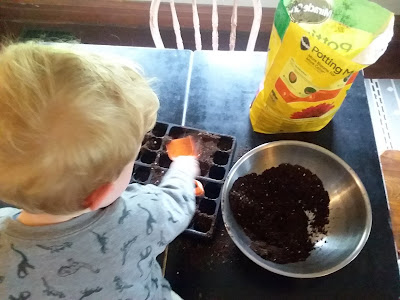 We wanted to give them a head start on the growing season so the next day we got out some supplies, he planted all of them and we put them under lights.  We talked about how peanut plants grow. This was May 10th I think.  They germinated really quickly. 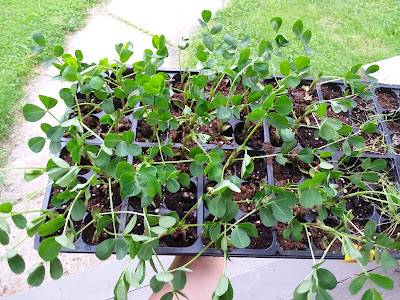 Here they are in the tray before we planted them out.  The leaf pattern is driving me crazy because they look so much like a wild flower I've seen somewhere but can't remember the name of. Does anyone know the plant in thinking of? I'm wondering if the two plants are related. 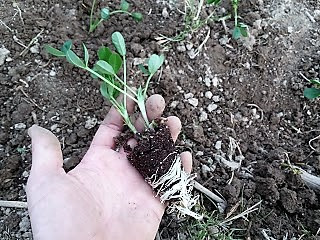 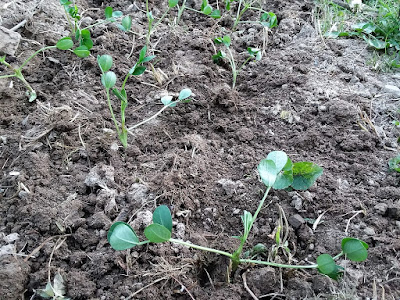 I have no idea how big a peanut plant grows so we spaced them out like peppers.  There are about 45 plants out there.  The world's smallest peanut farm. 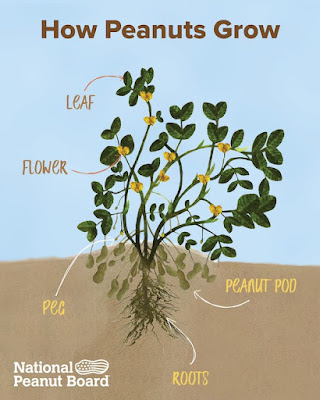 This picture came from The National Peanut Board website a site which would have been helpful to know about before we started this whole adventure, but what fun would that have been?

. When the peanut flower is fertilized it grows something called a peg with the baby peanut on the end of it.  The peg grows to the ground  where the baby peanut buries itself under the soil and continues to grow.  At the end of the season you pull the plant, shake it off and voila! Peanuts!  At least that's the plan.  One can assume that regular weeding is pretty important in the process and God knows I'm no good at that.  The idea is that this weekend we'll go out there with cardboard and grass clippings and mulch around the transplants.  Then when the pegs appear I'll pull the mulch up so they have clear ground to bury themselves in.

We're very excited about it all.  To be continued...
Posted by Cottontailfarm at 8:52 AM