What an odd title for a post.  Wow, that's horrible considering what an unusual weekend it's been.
First off - I went to TSC to buy a chicken coop on Saturday.  I  have been looking at these coops for weeks and knew which one I wanted: the one on the right, which would look great next to the other coops.  I would like it for my little group of Easter Eggers (1 Rooster and 5 hens) to ensure some pure hatching eggs in the spring. 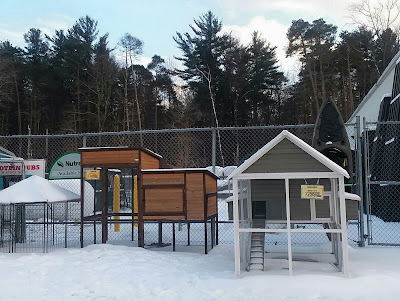 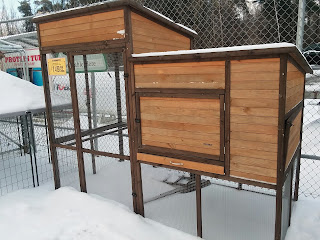 The Prairie Coop had been marked down again, to half the price of the green coop.  You can't tell by the photos but the square footage of the base is pretty close to the same.  Dang it anyway.

i still liked the green coop better.  But did I like it $150 better? No, I did not.  We have plenty of exterior paint in the basement and it will not take but an hour to paint it the same blue and cream colors as the other two coops.  And drill in some extra ventilation.  $150.  These are chickens, folks.  It doesn't need to be the Taj Mahal.

So excited was I by my savings that I went ahead and bought the spires and hooks to tap the two Maple trees in the front yard.  This week I will call around to get some nearly-free food grade bakery buckets and look in the local thrift store for a couple of big roasting pans to evaporate the sugar water over the fire. 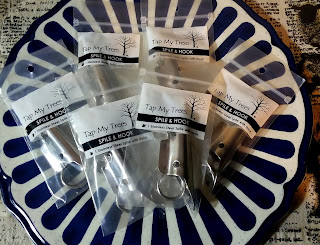 What else?  In other news we had quite the adventure yesterday.  We all piled in the car to go to my parent's house to let the dog out as my dad was away for the day.  When we got there I turned the car off in the driveway and threw the keys into the center console (It's a small town, who the hell doesn't do this?) I got out of the car the same time my husband did.  But, by the way of opening the door, he managed to hit the lock while closing it... leaving the keys locked inside the car ALONG WITH BOTH CHILDREN.  Holy crap people.  We had locked both kids INSIDE THE CAR.  It was about 15 degrees outside.  Both of them were crying; the baby because he's teething and the oldest because he's old enough to know that somehow the shit had hit the fan.

Holy crap.  After a very brief "whose fault is this" I called 911 and explained the situation.  An officer showed up, unlocked the door and we had both kiddos out within 4 minutes of me placing the call.

Both children recovered from the trauma/drama.  We went inside, ate pizza and turned the TV to the movie Happy Gillmore (quite the novelty as we don't have a TV at home).  About 15 minutes into it the oldest talked to himself quietly then, a little louder said "Mama? Shut the hell up?"

Hahahahaha.. he's never said anything like that before and doesn't have a clue what he was repeating.  It was so funny I couldn't help but laugh until my sides hurt. 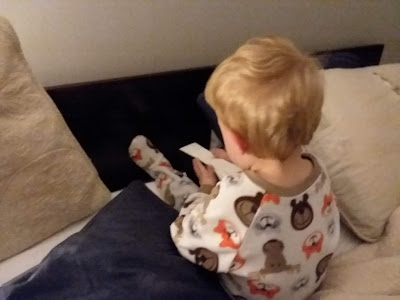 For contrast, here he is tonight when I went up to read him a bedtime story.  He pulled the Bible off of the nightstand and was studying it quietly "Mama, this is a lot of words."

I can't even handle it.

Oh, in cooking news my sister send me this recipe for 10-minute white bean and spinach soup.  I tossed all of the ingredients into the crock pot before going shopping.  It is sooo delicious and easy.  WOW, this is going to be on regular rotation here.  Even if you have to buy all of the ingredients I'm guessing it would come out under $5 to serve ten. 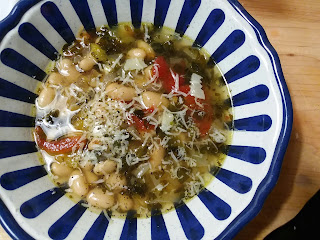 So, so good.  I should think it would also be great over toast with a soft boiled egg.

Here's to the weekend, cheers!  What's in store for us this week?

Posted by Cottontailfarm at 9:55 PM