What's been going on this last week, a lot.

Wow. There have been so many times this past week where I think "I want to remember (whatever)" but don't come here to write it down so it gets forgotten.  Lucky there are pictures.

First, the weather.  Wow, we went straight into Spring here this week.  It's been absolutely amazing. Probably the 50's every day; flowers are coming up and crocus are blooming in the front yard.  Rhubarb is growing along with the garlic planted last fall. 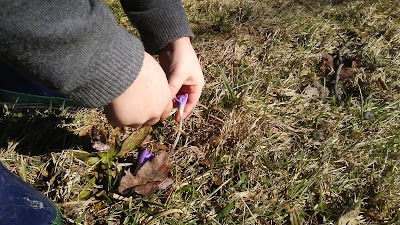 Crocus in the front yard. 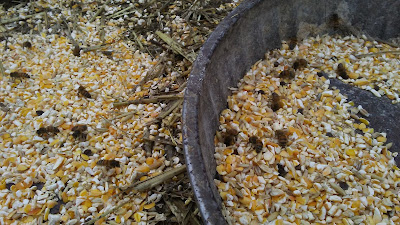 The first warm day we found honey bees gathering some kind of nutrition from the pan of chicken scratch.

We have been making the most of being outside.  Long walks, digging in the dirt and lots of playing. 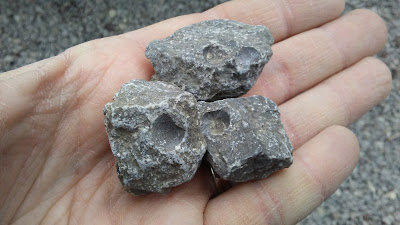 Tiny shell fossils found while playing with the gravel in the driveway.

I bought a set of melamine dishes and mixing bowls.  These have been absolutely perfect for us.  The little man is now setting the table for meals with no help from me at all which pretty much justified the purchase right there. 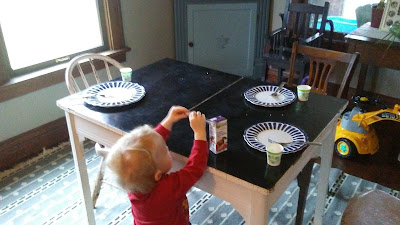 We've also been spending just about every day using the mixing bowl set to make something or another. 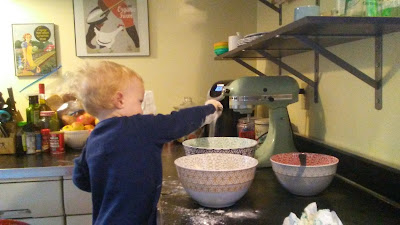 Mostly we've been making banana bread which involves measuring, transferring, stirring and mashing.  Plus our new skill, cracking eggs.  We've made our regular daily bread and I've made another batch of egg noodles while he was napping.

What's new in the poultry world... Some things got done this week. The hennies had been going over the 5 ft. fence so they all got their wing feathers trimmed. I fixed a hole in the fence.  One of the Cornish roosters took a swing at me. 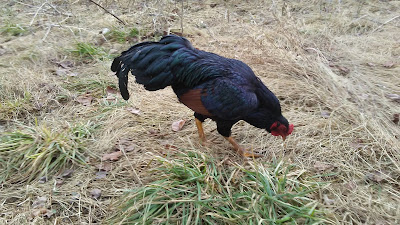 This guy.  So long buddy. I don't tolerate that kind of thing here at all.  He got butchered the next day at which point I realized that being pregnant, I just don't have the stomach for it.  Not the killing part but the cleaning.  So I put an ad on Craigslist that night for the two remaining extra roosters running around the yard:  "Free Delicious Roosters" I wrote, "come and get them".  Within 12 hours I had 2 families contact me.  "You know it's an animal rights group setting you up for a sting operation, right?" said my husband.  But no, when I met them in the TSC parking lot it was a young couple with a shiny new car ( probably didn't smell like "new car"after the drive home) and a tiny pet carrier who said that they had chickens and the kids thought it "would be cool to have roosters."  Great, whatever, have at 'em. A win for everyone.

The geese are laying regularly and wanting to nest.  They've contributed about a dozen huge eggs to the kitchen at this point, all being turned into egg noodles.  I've decided to stop gathering their eggs and the duck eggs, and just see what happens.  Just because *I* don't want to raise any birds this year doesn't mean they can't, right?  Isn't that like a loophole? The hope is that a big pile of eggs in a nest will make the birds think of brooding. One of the ducks has nested before so I have high hopes for her.  The geese, well, we'll see.

Speaking of geese, well, it's spring.  I've read that owning geese is like owning a hive of bees and I can see that point.  Sweet, worth their weight in gold but something that needs to be treated with respect.  I don't take crap with roosters but am more lenient with waterfowl especially in the spring.  The gander tried to kill Nigel this week, leading me to section off half of the poultry run with a short 2.5 foot high fence. 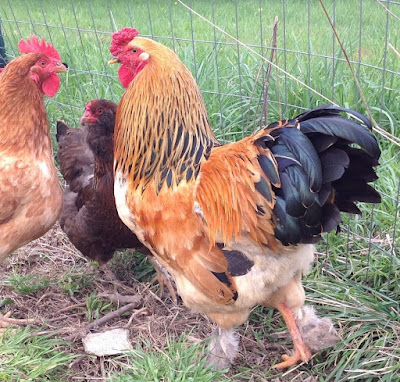 Aside from trying to kill Nigel he has also been taking a swing at me on a daily basis.  The problem is that one of the lady geese occasionally will go over the fence to hang out with the chickens and then I need to put her back at the end of the day.  So I'm herding the lady goose and waving my arms and the whole process just sent him into orbit.  Most male waterfowl are bluffers in my experience.  Not this guy.  He holds a grudge.  Much to my horror, he can also use his fat floppy feet to climb up and over that fence when "offended".  The first time he climbed over the fence with his huge wingspan stretched I had a slow-motion "oh holy shit I'm gonna die" moment.  Then he ran up and grabbed onto my jacket and started shaking it.  The thing is, it's kind of like dogs.  You have to be the leader out there without question.  Several lift-and-tosses with my boot only slowed him down and eventually I ended up pinning him to the ground and laying on top of him until he calmed down.  Visibly pregnant I'm doing this.  What the hell the neighbors think, I don't know.  So he's going to be a good protective dad that's the bright side.  And I've read and hope this behavior will wear off after breeding season. 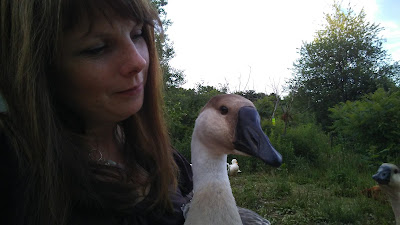 Back when we were buddies before all hell broke loose.

The garden: I've bought a few packets of seeds and a little goji berry bush that will hopefully be planted tomorrow.  All of the strawberries seem to have made it through the winter along with the herbs.  Yay!

It's a good thing to be taking a season off.  Things will grown and harvested but nothing above and beyond,  I'm going to use this time to really re-think some of my long-term goals for the property and change some things here.  Reflection has already pointed out that some of the things I'm doing really could be done better and some things don't need done at all.  There are thoughts of some new and exciting things too.  I hope to hash that all out here over the next several months and start working towards those goals.
Posted by Cottontailfarm at 8:18 PM