What a fun project.  My father surprised me with a really fantastic gift for Christmas; the pasta attachment set for the Kitchen Aid mixer.  I love making pasta by hand but to be honest, mine always has the texture of, um, leather.  The pasta never gets rolled as thinly as it should.  I've longed for one of these sets for quite awhile but they're alarmingly out of my budget (especially when you can but noodles for 99 cents a box for goodness sake).  So I was thrilled to get this.  Now that the geese and ducks are laying, I can finally use it.  Goose and duck eggs have a much higher fat content than chicken eggs and that's a good things, right?  Plus waiting for them just made it seem more special.  Look at the color from those yolks! 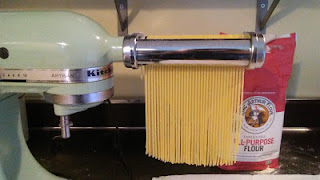 First, I should start at the beginning because there are some things to remember for next time.  The roller set came with a recipe that called for 7/8 a cup of egg.  Who the hell thought of that number?  So I guessed. 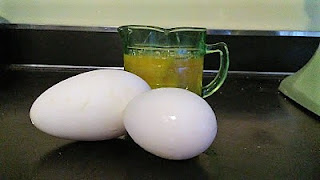 One goose egg plus one duck egg looked about right. 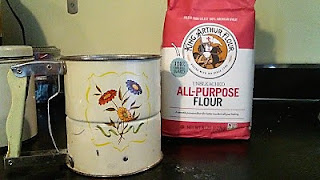 You're "supposed to" use 00 flour for pasta making.  I think because it has a lower gluten content?  Well, we live in the middle of nowhere and I wasn't going to order it on-line.  Does anyone order food from Amazon?  It's irrational but the idea of doing so creeps me out a bit.  King Arthur would have to do.  It was a splurge considering our flour usually comes from Aldi's.  I sifted it before measuring.

The dough this made was so, so dry I didn't think there was anyway in creation that it was going to be edible.  But I let it rest and then sent it through the rollers. 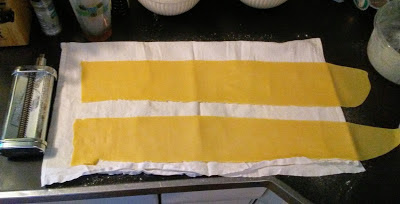 Yep, those are cloth diapers.  Never used.  You're welcome, all who dine at my house.  The cloths were floured and the pasta sheets were floured as they were stacked.  I think there were 8 total.

Note to self: go ahead and cut these sheets into the *size you want your finished noodle to be*.  Duh.  When the spaghetti was being cut I found myself trying to wrap the loooooong, tiny noodles around my arm as they came out of the machine. 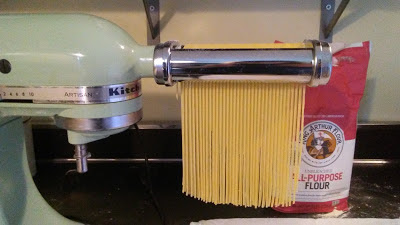 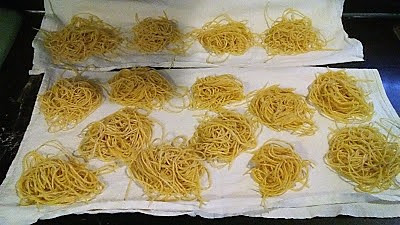 I dusted them with flour several times while they dried and fluffed the little nests.  Besides what you see here there were quite a few noodles on the floor.  I think the recipe stated that it made 1 1/2 lbs.  The ones that we didn't use that night are stored in the refrigerator. 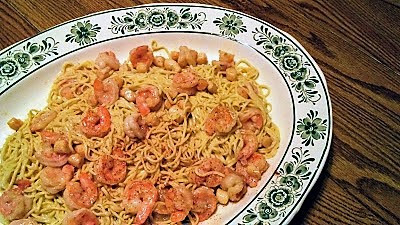 I took them over to my dad's and made a simple shrimp pasta for dinner.  The noodles cooked in about 3 or 4 minutes.  Everyone loved them, they had the best chewy texture and made the store-bought seem plastic-y and rubbery in comparison.

It's fun to mess around with home made pasta but it can take a long time when you're making it by hand (all afternoon for me).  I think this cut it down to about 45 minutes from cracking the eggs to clean-up.  This gift was really a game-changer for our household.  Like baking your own bread, fresh noodles are really a step up (nutrition and flavor-wise) for the family table.

I'm not going to be making noodles daily but I can see it being done once a week. This seems like a tremendously handy way to "put up" eggs when we have a glut of them as well.  The ducks lay an egg every single day in season and the geese each lay an egg every other day so they add up quickly.
Posted by Cottontailfarm at 9:10 PM