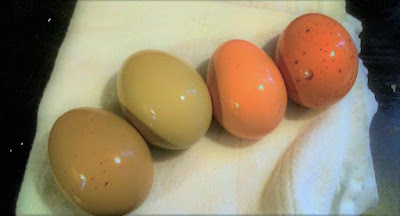 Egg season is apparently upon us, and thank goodness.  I want to remember that we started getting eggs about a week and half ago.  One of the Easter Eggers (second egg from the left) was laying every other day.  For as long as I've kept chickens, Easter Eggers are always the first ones to start their engines in the cold of winter.  It's so nice to go out there and find those cheerful green eggs.  Today I went out to gather her egg before it froze and - surprise! - three of the other hennies had decided to get to work as well.  The egg on the far left is another Easter Egger and the two brown ones are the "meat" birds that were kept last fall when the other ones were butchered.  That speckled one on the far right is really lovely and something we haven't seen before.  I'll probably blow the egg out and save the shell for display. 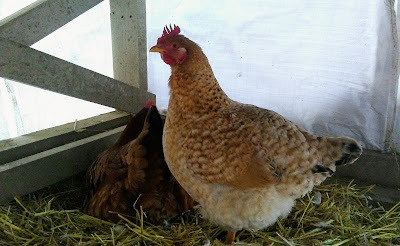 This is one of the "meat" type hennies.  They're called Rainbow Rangers.  Look at those feathers! 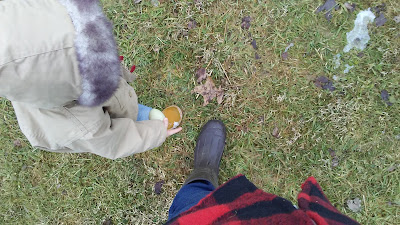 Getting breakfast the old-fashioned way.

Which brings me to nest boxes.  One of the feral yard chickens laid an egg recently too but she laid it on the floor of the duck coop and I didn't find it until today.  By that point it had frozen solid and the shell had cracked.  I used to have a nest box in the duck coop but had forgotten about it this year.  So, enter Aldi's.  Not only do they sell tons of organic groceries for cheap, they also have these amazing nest boxes free for the taking. 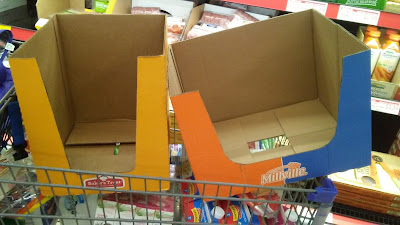 Some people might see cardboard here but these these boxes are golden.  See how they have the little lipped scoop in the front? And the sides are high?  Add a big handful of straw to each one and hennies love to lay eggs (and raise babies) in them.  They feel secure in them.  And guess what?  If an egg breaks, you can just throw it out and get another box.

So grateful to be getting what appears to be a steady supply of eggs at last.  The ducks, geese and quail aren't laying yet but in their defense it's super cold and I don't blame them.  Birds lay eggs to make babies, not feed us, and I can't argue that logic when a "warm" day is 20 degrees outside.
Posted by Cottontailfarm at 10:17 PM