What a weekend.  In a good way.

The little guy and I spent Friday and Saturday with my sister and her family near Cleveland.  On Saturday morning my sister, my niece, the little man and I went downtown to participate in the March for Science.  President Trump's proposed cuts to funding the Environmental Protection Agency  by 31% should be alarming for everyone but to the residents of a city who actually saw their river catch fire? Not once, but MULTIPLE times? Let's slow that down.  THE DAMN RIVER CAUGHT FIRE PEOPLE.  I've read that we were in a group of 8,000 people who showed up on Saturday.  It was a lot of fun. We didn't carry signs and mostly just hung out but my niece dressed in her Halloween dinosaur costume and we had a really nice morning downtown.  The little man was blown away by all of the sights of a city; buses, helicopters, police on horseback.  I am usually not a person that participates in this kind of thing but it was a really good time.  My favorite sign?

When we left on Friday I double fed and watered everyone and left my husband with instructions to "do nothing".  There were 6 peeps that had hatched at that point.  "Don't worry about the incubator, don't touch it, don't even think about it.  They'll hatch or they won't".  I said.  Well, hatch they did. And how. 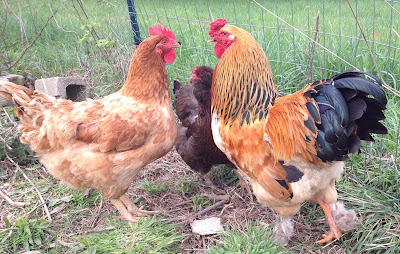 Baby Daddy Nigel delivered the goods. I came home to EIGHTEEN peeps from the original 21 eggs.  I was hoping for, oh, maybe 7 or 8 and ended up with 18.  They are adorable.  All of them have feathered feet but interestingly none of them have slate colored legs?  Two of the four mothers had slate legs.  It was absolutely impossible to take a picture of them all in the brooder without someone being blurry so here you go: 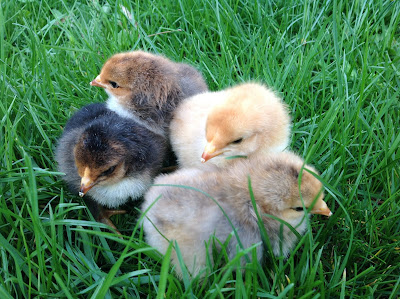 Here is a picture to show the 4 colors they came in.  I am assuming that the light one is from my Red Ranger hen and the other ones are Easter Eggers. 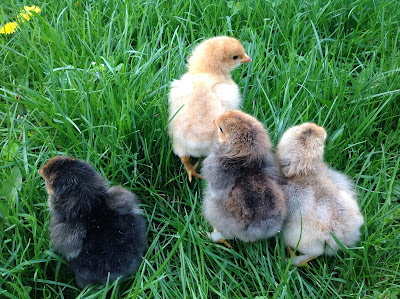 Here's another because: bird butts.  I cannot get over how adorable they are.

The plan is to keep them until they feather out, select the few that I want to keep and Craigslist the rest.  Also  I'm going to call McMurry hatchery and adjust my order for June to delete the egg layers and buy all meat chickens.  I had no idea when I placed the order that my rooster was so, um, fertile.

Which led me to do an actual head count on Sunday morning.  I still count on my fingers and needed to do the maths with a paper and pencil. Currently there are *cough* 70 *cough* birds on the property.  And another 6 ducks and 4 geese arriving on Wednesday.  And a bantam sitting on a nest.  BUT.  That number should fall drastically by the end of May.  And be down to about 25 by fall.  And the freezer should be full and that's the point. 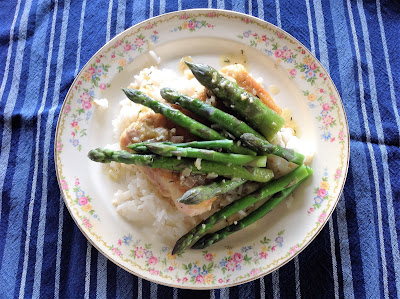 Cooked our first meal with homegrown asparagus.  I loosely followed this recipe from the New York Times for chicken breasts with lemon and added the asparagus on top.  Used de-boned and butterflied chicken thighs instead of breasts.  It was lovely but I'm looking forward to a day very soon where we can cook chicken without feeling like we have to get out the bleach and hazmat suits. 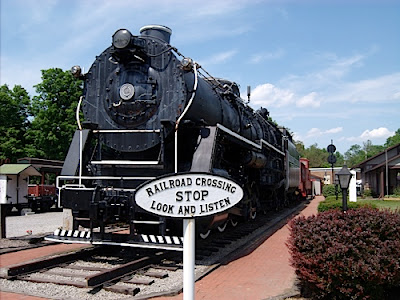 The little man has been obsessed with "choo-choos" of late so Sunday we took him to the railroad park in town.  It's pretty awesome.  You never really know how large a steam engine is until you're standing right up against one.  They're absolutely massive.  He loved it and we all had a really nice morning.  This picture is courtesy of the Google since all of the ones I took had our faces plastered all over them.

What else did I do... Listed some things on Ebay.  Did more work in the garden.  Planted snow peas, shallots, two kinds of cabbage, broccoli and some herbs.  Also planted cannas tubers and gladiolus.

Posted by Cottontailfarm at 10:02 PM