The quail are now over two weeks old.  This weekend I finished the quail tractor and kicked  installed the quail out in the garden.  It was for the best.  The quail were fully feathered out and they had crossed that point where they ceased to be adorable and were starting to be what I could only politely call annoying as hell.  The top of the brooder was totally covered in wire mesh but every day, every damn day, I would go out the garage in the morning to find that they had knocked the cover aside and several of them were running loose around the garage.  Meanwhile I had a child in the house waiting for breakfast and a husband leaving for work.  Luckily they are easy enough to catch - I put a pet carrier containing food and water on the floor near the other quail - eventually the runners would get bored and just go hang out in the pet carrier where I could scoop them up.

Also every time I walked into the garage they would all panic and flush straight up and hit the wire cover.  It sounded like popcorn popping. I was having dreams of tiny grilled quail kabobs (which would probably be very good). Neither they, nor I, could take it one more day of it.


Enter the quail tractor.  It's actually this "TSC Farmhouse Expansion Pen" that I bought at Tractor Supply Company a couple of months ago.  I promise you - I did NOT pay that listed price for it, no way.  The store near us put out a bunch of seriously marked down pens for sale and with a coupon  I got it for less than 50% of retail.  Tax included. That's much more reasonable. 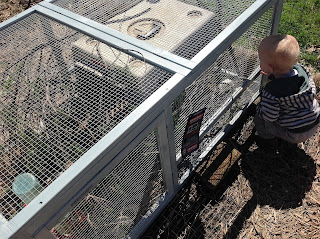 It's actually pretty sturdy, was super easy to assemble and just needed another couple coats of stain and some more/better latches and handles added.  Maybe another $15 in parts?  The stain we already had.

So I finished it today.  Put it inside the garden, for now, and added a large pet crate inside for shelter (bought a a yard sale for $2).   The little guy and I collected a bunch of fallen pine boughs and added those inside the pen for cover. 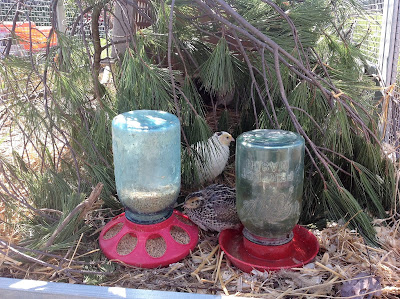 If the quail could talk, I believe that they would call today the "best day of their lives'.  Honestly.  When given a more natural environment they turned into completely different birds.  Immediately.  They soaked in the sunshine.  They took dust baths.  They scratched in dirt.  They lounged.  They chirped. They were so content that they totally ignored my little guy and one of the birds stood still under a pine branch while he petted it.  Because it takes a toddler about 2.5 second to figure out how to work a barrel latch and open the pen up himself. 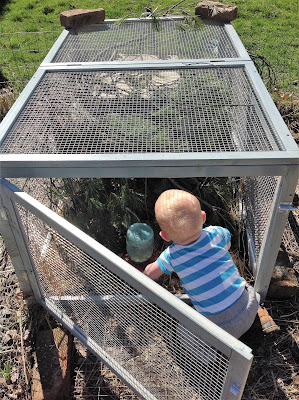 Large enough to house a toddler? 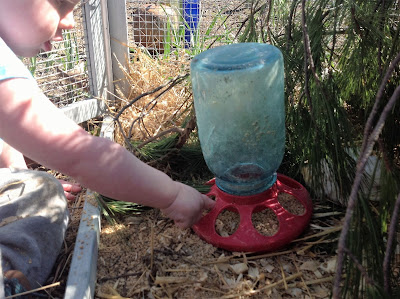 Those quail are totally ignoring a near two-year-old playing with the feeder. It was full before he found it.

Overall I am super happy with this product and the quail are too.  I did add some additional things to try to varmint-proof it.  Bricks on all four corners to add weight and also slid panels of fencing under the edges to deter digging. Let's hope it works out. So far so good. It's inside the garden fence for now but the plan is to move it around the yard over fresh grass once the weather evens out.

Anyone else keep quail or want to?

***Edit with some more information.***

The pen doesn't have a bottom on it so the quail can be directly on the ground.  They LOVE bugs and dust bathing and (to me anyway) it seems a far more natural life to give them then being on wire all of the time which is how they are commonly housed.  Here is a picture of the hutch I kept my little group of quail in previously.  They did OK in it but I like this idea better.  The weather is starting to settle here and the idea is that they can be moved to fresh grass every day. This will provide them with new opportunities to eat insects, seeds and also keep the ground underneath them clean.

The shelter for the quail is currently a plastic pet crate.  Quail don't roost and in my experience most times don't even bother to seek shelter from rain or wind and prefer to always be out in the open.  However, this will provide them with shade and a nice cozy area to shelter in if they choose to use it.  Additional shelter is provided by all of the pine branches - really we stuffed a TON of them in there.

There are 27 quail currently and the pen measures 55 inches long by 33 inches wide.  As they grow I'm expecting that's going to get crowded.  I have several fencing panels here from old rabbit crates and am thinking that I will be able to put a temporary addition on this quite easily.  Quails hit maturity at 8 weeks so at that point I will put all of them but about 6 in the freezer (the remaining birds being kept for eggs).  These were purchased as straight-run so if the males are fighting before the 8 week mark they will be butchered early.

Why bother?  Well, as much as I like to grow plants, fish, forage and grow birds my big hobby is actually cooking.  All of this here happens so I can have the best quality, most diverse ingredients to play with in the kitchen and feed my family.  Quail eggs are amazing to top little burgers, hard boil for on salads and pasta or crack on little grilled pizzas.

Plus, I've found that poultry of all kind are a real joy - sometimes I just like to sit out in the poultry yard and watch everyone go about their day.  Quail are beautiful, curious about life and make the most lovely noises.
Posted by Cottontailfarm at 11:01 AM