It's been an unusually busy weekend around here. I have talked and texted with literally about 30 different people about the camper since listing it for sale and I think I have it sold.  We'll see tomorrow but after talking on the phone with one lady multiple times and emailing another 20 pictures to her I'm confident that I've accurately represented the camper.  She's making a two hour drive tomorrow morning to see it.  Here's hoping.

Saturday morning was the auctioning of my grandparents' estate. I had agonized for weeks about if I should go or not; how I would feel when I got there and saw strangers buying their posessions, if things would feel incomplete later on if I had stayed away from it.  I woke up in the early a.m. and laid in bed realizing that into matter how badly it might upset me to go I would feel worse staying at home knowing it was happening.

So we got up with plans for me to go the auction which started at 10 and while playing on the floor before breakfast the little man managed to shove a massive splinter up under his big toenail.  It was his first major boo-boo. The splinter was so large it went the entire length of the nail and into the nail bed. I nearly passed out.  It was broken off and we ended up taking him to the pediatric ER to have it removed. The people there were wonderful and he had mostly forgotten about the whole ordeal by the time we got home. The bag of goldfish crackers and toy the nurses sent him home with helped.

I got to the auction very late. Let me set the scene: I was already feeling uneasy. It was raining and overcast and muddy. My grandfather's garden was being used a parking lot.  People were carting things away from the barn and house. I squared my shoulders and prepared for the worst. But immediately I saw some of my mother's cousins, and my uncle and his family.  I went over visit and heard the news: my second cousin had bought my grandparent's house and some of the property.  The barn and fields had been lost to someone who bought them for hunting land but the home and some acreage would stay in the extended family.  It was like the clouds had parted and I could have wept with relief.  Maybe that sounds dramatic but for some reason knowing this made everything else so much easier to deal with.

My grandfather and his brother bought a 100 acre farm together in the 1950's, split the land and built homes next door to one another.  They both had big families and it came to be that one of the babies came very quickly.  So quickly that my grandmother ran outside and helped deliver her sister-in-law's baby in a car in my grandparents' driveway.  The cousin who bought the house? His mother is the baby my grandmother helped deliver. He literally bought the property his mother was born on.  My grandfather's brother's family has managed to keep a large part of the original farm together and I admire that greatly and am grateful for it.  I am grateful that it wasn't bought by a stranger.

So it turned out to be a good day after all, and I am very glad that I went.

It's been raining here this weekend but otherwise beautiful.  And HOT. 84 degrees today. For anyone who forages, morel mushrooms are up already.  I haven't had a chance to go picking yet but maybe tomorrow.  We had a very good dinner from the garden tonight. 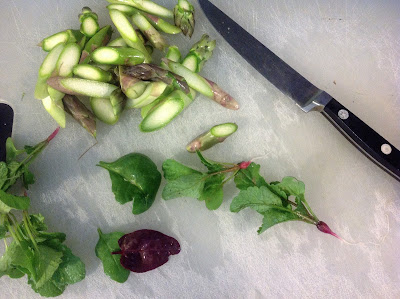 Lots of thinnings from the garden: orach, spinach, chard and radishes sauteed in bacon fat along with shallot, garlic and red pepper flakes.  Deglazed with lemon juice and tossed with pasta and asparagus . 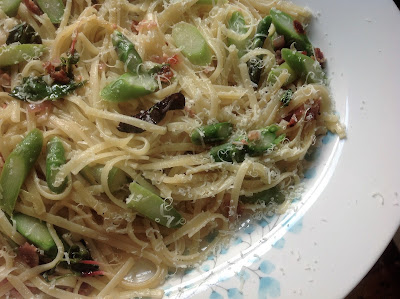 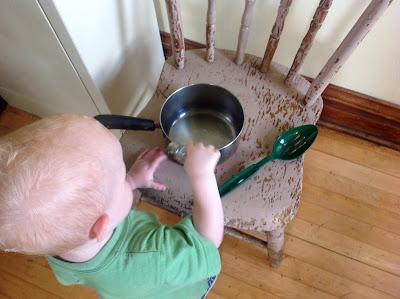 My apprentice was also hard at work. 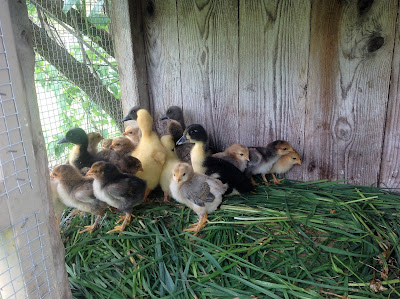 Because it was so nice and warm today all little ones spent the day outside airing out and enjoying the weather.  The goslings ate grass and the chicks and ducklings hung out in the old rabbit hutch where they were out of the reach of cats.

Also because it was so nice today, the not-so-little ones enjoyed some summer drinks: half Sierra Nevada beer, half carbonated strawberry lemonade.  Over ice with frozen strawberries. 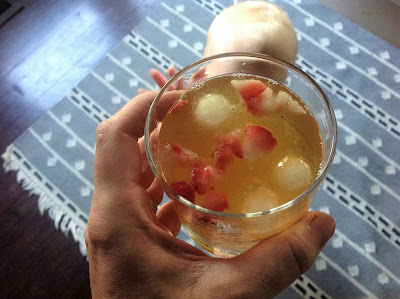 If this were a video you would see a lot of hand waving and hear: "ma. MA. MAMAMA!" the volume of which increased as he realized he wasn't getting that cocktail.

So, minus the terrible splinter incident, it turned out to be an excellent weekend after all.  Here's hoping for some more good days.
Posted by Cottontailfarm at 10:31 PM