You know when you're pregnant and you go for an ultrasound and the technician waves the magical wand over your stomach?

Yeah, that's basically what happens to chicken eggs, except with a really bright light. 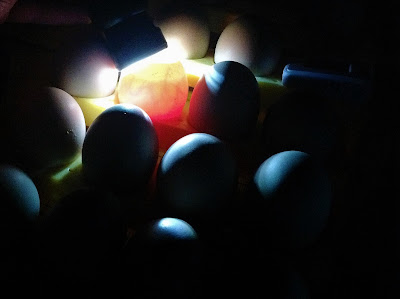 To see what's inside we "candle" the egg - because it used to be done by candlelight back in the day.  Now we do it with a little penlight with a cup on the end.  It's absolutely amazing to be able to peek inside an egg and see what's going on.

Today is day 7 of the chicken incubation and I took a look at all of the eggs to see how many were developing properly and to pull out any ones that were duds.  Well, I was pretty shocked.  They were ALL fertile and all but one was was alive and well.  Our former rooster, Mr. Rooster, had his favorite hens and other hens that he totally ignored.  Those second tier girls couldn't get action no matter what they did and it was really kind of sad watch them literally throw themselves on the ground in front of him and be totally ignored.  Apparently Nigel, God bless him, loves all of the ladies equally.

Of 21 eggs, 20 are alive and well. The one that didn't make it had a blood ring - a sign that the embryo started to develop and then quit very early on. 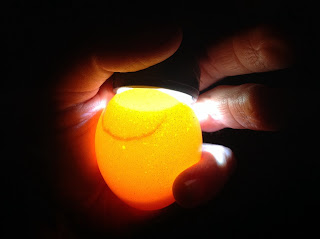 This is a great example of a blood ring - very obvious on a light colored egg.

I took a little video so everyone can see the little chicken moving around in the egg at what is, effectively, the end of its first trimester of incubation.

Posted by Cottontailfarm at 10:10 PM