Opening day of trout season for us was last Saturday.  I don't believe that we have native trout in our area because the water temperature of the streams gets to be too warm for them in the summer (they do up in Erie and around the Great Lakes but those are the bigger lake trout - I'm talking small rainbows and browns).  Someone please chime in here if I'm mistaken because I am sure as heck not an expert on fish.  All I know is that each spring PA stocks rivers around the state with literally millions of hatchery-raised trout and then people like me buy a fishing licence plus trout stamp (about $32 total) for the privilege of going out and trying to gather them back up. 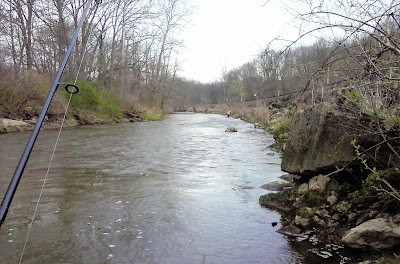 I consider this day a personal holiday and it's a big thing to get together with my family for two reasons. Number one, it's a celebration of spring and the un-official start to the fishing season.  Number two, my mother actually passed away on the opening day of the season.  This day marks our second year without her.  So it's especially nice to get together with everyone.  My father and I go out along with my brother in law and his father. My husband came out before we had our little guy.  Last year my uncle came from across the state with my cousin too.  It's a peaceful morning of enjoying the quiet beauty of the river and then we all have a meal together. 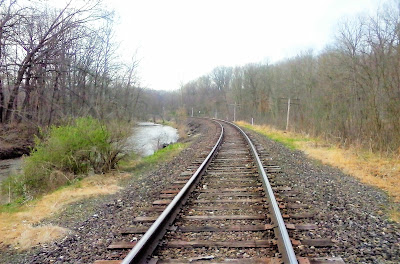 The place we fish is a river that runs between two railroad lines.  It's the place my father grew up fishing when he was young.  The banks are terrifically steep with loose gravel and you have to be very sure of your footing going up and down. Once you're at river level picking your way up and down the stream to fish the holes is a task that requires the total of your concentration lest you fall in the water.  There is no river bank to walk along. Just loose rocks and railroad debris.  Sometimes trains go by, practically overhead, while you're fishing.  But it's worth it.

It's normally packed with people on opening day but pretty wild and lonely the rest of the year.  As a woman, I would never fish there by myself because  it's too remote for me to feel safe.  We see deer there; turtles, foxes and many types of birds as well.  This year I saw an eagle and a kingfisher glided past me over the river as I fished. 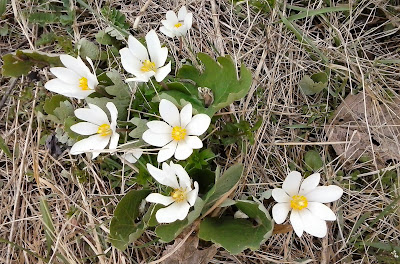 And these wildflowers. I don't know what they are. 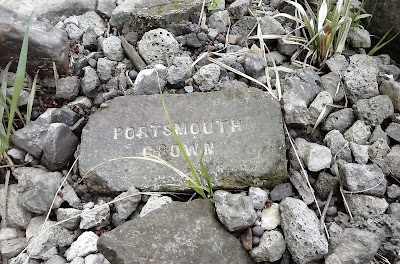 Things like this antique brick are common in the banks.

Usually it's pretty easy to catch your limit of trout (5) without too much effort but this year was a total bust for me.  Cast after cast produced not even a nip on my spinner. It was disappointing.  The season opens at 8:00 in the morning and by the time the clock hit 9:00 I was getting pretty frustrated. I  thought about the strength of the current and the visibility of my lure. How it acted in the water.  Where the fish might be resting.  Nothing was happening no matter how I changed up my lure, added weight, subtracted weight, changed the speed of my retrieve.  Nothing.

It was at this point that my brother in law made a big scene downstream reeling in a fish (for the benefit of his fish-less dad, not me, I later found out).  I nearly cried tears of anger.  Honestly, I was standing in a stream, blinking them back  Damn it! Do NOT act like a girl! Pull your shit together!

It got worse.  Shortly thereafter my dad came by to see if I was having any luck.  We were talking as I was reeling in a cast - nope, nothing, not a bite - and at that very moment a fish hit.  As I tried to set the hook the damn thing literally flipped though the air and back into the water.  In slow motion.  I'm pretty positive it extended a middle finger as it went by.

I was done.  I drove straight to McDonald's and ordered a breakfast sandwich.

And the fish started hitting half an hour after I left.

The bright side is that my father had caught a nice trout while I was there and sent me home with it.  I made it into a little appetizer and took it back to his house to share with everyone later that day and we had a very nice Easter together.  There were children and dogs everywhere and it was chaos and it was wonderful.

1) Have someone catch a fish for you because apparently you are incapable.  Bring it home and clean it.  Don't bother scaling it because you'll be taking the skin off later.

2) Stuff the cavity with shallots and orange slices.  Drizzle with olive oil, salt and pepper.  Bake at 350 until done (15 min?)

3) When the trout is cool, flake the meat into a bowl and add minced garlic, Old Bay, parsley, panko crumbs and an egg.  Mix. 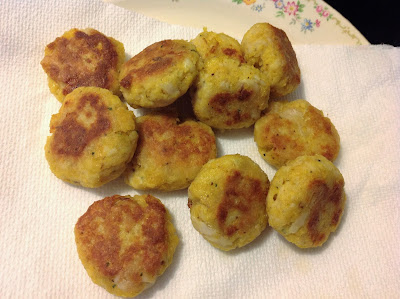 4) Shape into patties the size and shape of scallops.  Pan fry until golden and cooked through.

5) Wrap with bacon, fix with toothpick and put under broiler until bacon is cooked. Serve with a dip made of mayo, Worcestershire sauce and sriracha.  Ever people who profess to hate trout will eat these up. 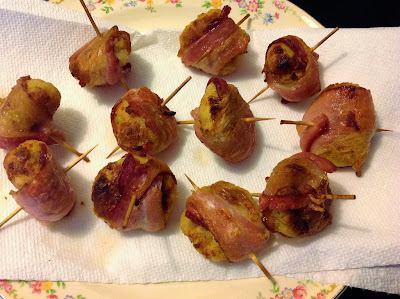 One trout makes about 12 nibbles. I think trout in the store is about $7 a pound while cost of two fishing licences with trout stamps = one $64 trout.  Time standing in a steam = priceless.  Even on a bad day.
Posted by Cottontailfarm at 10:06 PM