My pet rooster died. A changing of the gaurd.

Well, there you have it.  And it was my fault.

Christmas night we were at my parent's house celebrating with my father and my sister and her family.  We got home really late.  I forgot to close the coop door.

The next morning we were getting ready to travel to my in-laws for a couple of days.  Around 8 a.m. I looked out the window and saw chickens puttering around in the pen, and then I got busy because there was so much to do and I didn't go out there to feed and water until we were literally packing the car to leave.

I started across the property with the feed and water buckets and I saw something odd in the window of the chicken coop.  What the hell?  As I got closer I could tell it was a foot, hanging upside down from the window.  There was a black mass of fluff half blocking the door. 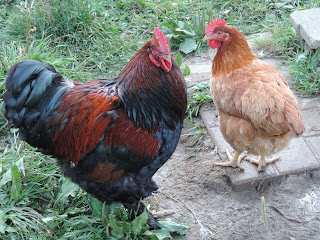 Talk about feeling like you're going to lose your breakfast  Something had scaled the fence during the night and walked up the ramp into the coop.  A raccoon probably.  Mr. Rooster had fought off the intruder and had given his life to protect his ladies, all of which were unharmed.  Somehow during the battle one of his massive spurs got caught in the fencing that covers the windows and this is how he died.  Hung upside down from the window.  The only consolation I have is that looking at his wounds (his tail and lower back were missing) and how I found him - he was injured before he got tangled up.  That, and once a chicken is upside down it only takes seconds before they pass out.  I'm guessing that his panicked flapping is what drove the animal off. 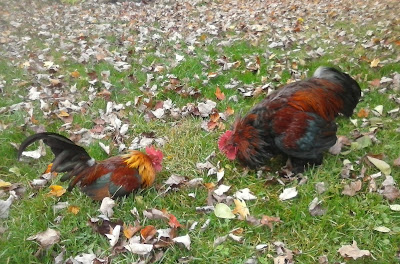 I feel sick.   Mr. Rooster was with us for five years and was, honestly, a beloved pet.  He protected his ladies, was a respectful gentleman with me and produced beautiful babies.  He was a massive cochin, weighing probably 12 pounds, and had a wonderfully fluffy butt.

I didn't even have time to bury him.  I took him to the far corner of our property, thanked him for his service and laid him beneath an old apple tree. 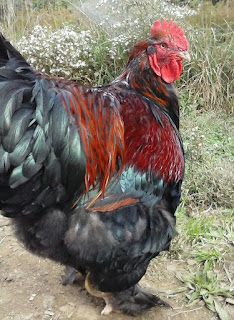 Anyone who knows me personally knows that this has been a pretty shitty month overall. I know he was "just a rooster" but I really did not need this.

Anyway.  It's important that the hens have a rooster.  I hatch babies every spring and the hens need the protection and guidance.  Tonight they were just wandering around the run looking lost.  Mr. Rooster used to round everyone up at night and make sure everyone was inside before he got on the roost himself.  The irony here is that I put Mr. Rooster's beautiful and well-behaved son in the freezer a couple of months ago because I had too many roosters. I have the bantam rooster but he doesn't count.  That leaves me with this guy who I just hadn't gotten around to turning into enchiladas yet. 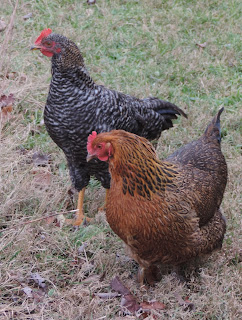 He's the striped one in the back.  Tonight I plucked him from the his roost in the duck yard, tucked him under my arm and walked him out to the big chicken yard.  I gave him an impromptu talk as we went.  Out loud.  "You're getting a pardon, little guy.  Because of the  untimely death of Mr. Rooster I need you to take his place out in the big coop.  You will protect those ladies at every moment and defend them with your life if need be.  Mr. Rooster left some pretty big shoes to fill and I need you to step up.  Oh, and you also need to get on the baby making."

We'll see how things work out.  I am really sad about this but that's how things go.

Posted by Cottontailfarm at 10:06 PM