It was absolutely beautiful here yesterday; 70 degrees out and sunny.  I took advantage and used a couple of hours to get work done outside.  A week's worth of rain + ducks = a poultry yard that was an absolute mud pit.  Not the whole thing; just the part where the coops open into and the feeders and waters sit.  Unfortunately it's also the area where I do the most walking and no one wanted to hear the swearing that was going to happen if I fell in it.  So I ended up spreading down an entire bale of straw which made the chickens happy but not the ducks as they much prefer messing about in puddles.

I also dug up all of the cannas and about 1/4 of the dahlias and am getting ready to store the tubers in sawdust for next year.

Herbs are in the dehydrator today; rosemary, sage, thyme and a little parsley.

Trick or Treat was yesterday in our town.  The neighbors across the street had a party again with a lot of children.  It looked and sounded like everyone had a good time.  They really get into Halloween - as in there are two actual caskets out in the yard all month.  Caskets, ok.  Just not sure the childrens' party required an air horn.

The little man went trick or treating with his cousins yesterday.  He did a great job walking and carrying his little pumpkin bucket.  He was a bit confused about the whole thing at first but by the second house had it down and would toddle up to the offered bowl, select a treat and place it in his bucket.  He was thrilled with the evening and after it was over we had to do several laps around the parking lot to convince him to get in the car.  He rummaged around in his bucket on the drive back and managed to get a Twix bar open and take some bites.  It occurred to me that at year and a half old he'd never had a candy bar before. 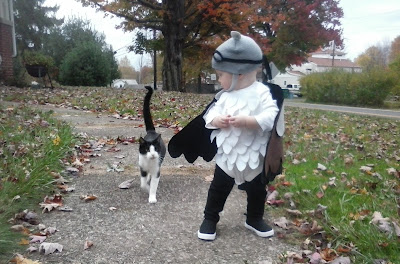 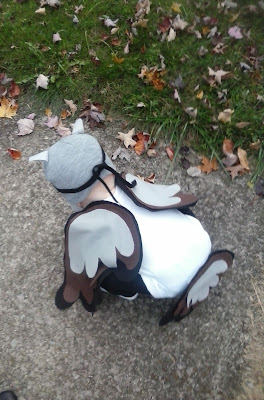 Here's the back view.  All of the pieces attached with velcro so when I got him out of the car seat we could just stick them on.  It worked really well.