Where did the week go 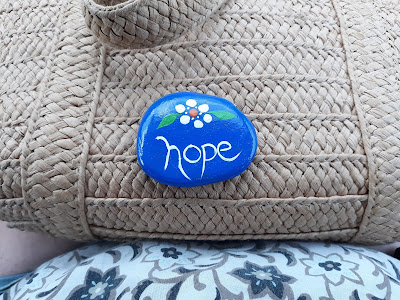 Found in the maternity parking spot in front of T.J. Maxx today.

Where did the week go to. Let's see what we've been up to. 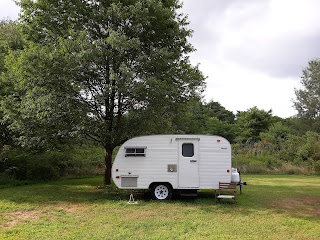 Home away from home. Sort of. 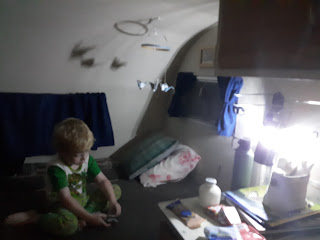 The oldest and I slept out in the camper two nights. It's been so nice to be sleeping in the fresh air and special time for the two of us. I've been reading after he falls asleep. 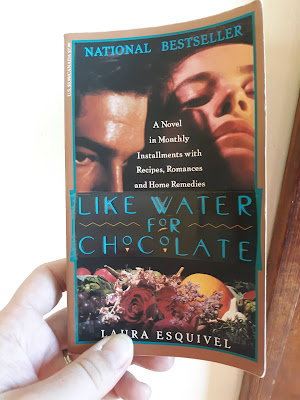 I tried to read this book. Twice. The format is really inviting, with the recipe at the start of each chapter and the first chapter is just beautiful.  But I couldn't stand any of the characters.  Even flipped through it to see if things got better. They didn't.  So I released it into the wild known as the Little Free Library.  The new book, The Devil All The Time came in the mail. The prologue is SO good that I'm saving the book for the weekend as this is going to be a up-all-night-until-it's-finished good one.

Besides reading in the camper I've also taken some quilt blocks out there to hand sew by lantern light. After taking a couple of months off from the Seven Sisters quilt blocks the reason why I didn't like them was immediately visible and able to be fixed. 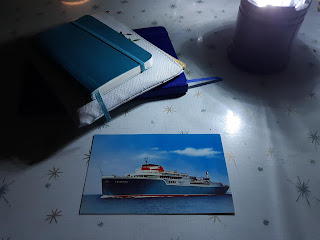 It's also a good time to write out Postcrossing cards. This was sent to a gentleman in Germany who likes nautical stuff.  It came from a box of cards from my dad, I thought it was just a random ship. Reading and researching it I learned that it was an old naval ship that was turned into a cruise ship of sorts in the 60's and was used to ferry vacationers all over Lake Erie. It had movies theaters and a ballroom and the whole bit. Interesting.

It's usually peaceful in the camper but the last two trips have been comical. The first night, the neighbors were hosting a high school reunion at the B&B, the DJ was so loud that even with all of the windows shut we could hear the selection of late 80s early 90s music. Then they switched to Country around midnight and it reminded me of when I lived over a bar in college. The second night I was outside around 3 a.m. and everything was silent... except for the coyote up the road. We've seen them on the game camera before but this was the first time I'd ever heard one. It was doing the typical coyote "yip yip" noise but then there was also a different call that it would repeat.  It was not too long after this that Elyse decided it would be a good idea to sleep in the camper with us.

Speaking of predators yesterday was a sad day. I lost two chickens in the middle of the afternoon to who knows what. There were just small piles of feathers left. The first chicken was a Wyandotte who was annoying anyway and that didn't really bother me but the second was my sweet, sweet little bantam mom who we've had for 4 years and who would have happily raised any kind of baby she got near. I think if we had given her a kitten she would have figured out how to nurse it, that's how maternal she was.

Here she is last summer.  This year she hatched 2 babies, both of which were unharmed but were wandering around the yard calling for her. It was so sad. I gathered them up and they've been installed in the rabbit hutch along with a pile of her feathers that I found. Poor things.

So there's that. Luckily whatever it was hasn't been back yet.

We are getting blueberries and loads of blackberries still. Tomatoes are coming on and dalhias are starting to bloom. The grass is browning and we are in sore need of a long soaking rain. 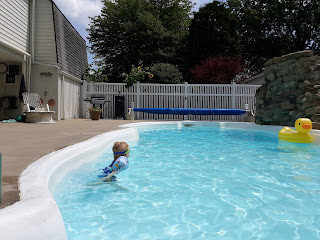 The oldest and I visited with a good friend and her baby earlier in the week. Pool time, a picnic and baby snuggling. 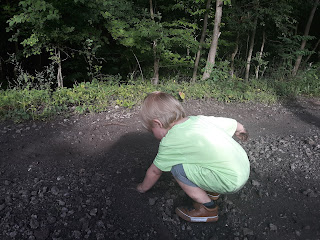 We took another long trail walk. The kids ate sandwiches while sitting on a log felled by a beaver. 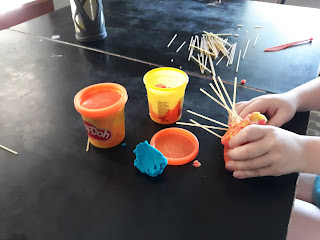 A couple of afternoons where it's been super hot we've gotten out playdoh and dried noodles. 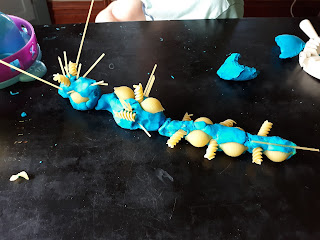 This is a dragon. 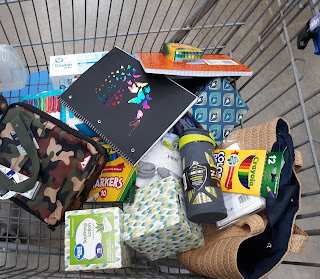 I took the oldest to pick out his own school supplies and boy did he ever. It's funny to see how his tastes are totally polar opposite of what I would pick for him. 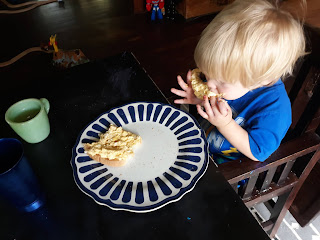 Here's the youngest enjoying his  favorite meal in the whole wide world, egg salad on toast. He loves it so much his eyes kinda glaze over while he's eating it. It's adorable.  He's also deeply in love with his rain boots and insists on wearing them 24/7. "Hey, where boots go? Gimme my boots." Is a pretty common thing to hear first thing in the morning. We've also been spending a lot of time with the wooden train set you can see a corner of here.

I'm sure there's more but it's getting late. For the most part it was a good week.

Posted by Cottontailfarm at 11:41 PM