Getting the poultry ready for winter

Well, snow happened.  It's been very unseasonably cold this week; 27 degrees today with flurries today and yesterday.  It seems early for this.  But, like anything miserable and unavoidable, it's also entirely possible that if it's this cold this early every year I've just somehow managed to repress it.

The chickens and geese needed to get ready for the winter.  I went out there today and spent half an hour with a staple gun and a cheap plastic drop cloth.  The drop cloth was $4, had already been used and was headed for the trash can so let's just consider it free at that point.  Everyone got a deep bed of straw as well.  I want to remember that it only took one bale to bed everyone, I bought 2 and the other one is in the shed.

I just stapled the plastic up to create some wind breaks.  There still plenty of ventilation.  I used woven feed sacks for this last year and the plastic choice was two-fold; the feed sacks looked ugly as sin and I am hoping that the clear plastic lets more light in as well as warmth from the sun. 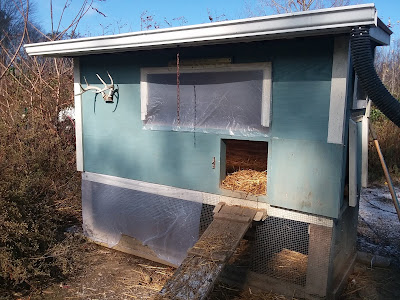 Here's the main coop.  There is a big window on the backside that is is open to the air (chicken wire)  but the sill rotted out of the front one this summer and it never got replaced.  With a new baby in July it just didn't make the priority list.  This is the side that catches the most wind so it got covered.

Underneath the coop is the night quarters for the geese.  I put plastic around three sides for half of it.  They have tons of fat and love sitting out in the snow so the other half is dry but open to the weather.  I'm also hoping that they choose to nest in the sheltered spot - this is where the door is on the backside - so I can mark the eggs come spring.

It may say something about my standards that I'm thrilled with how this looks from the kitchen window.  They're pretty low. 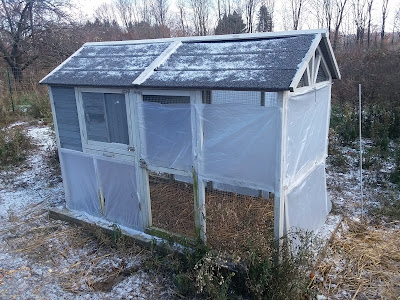 Here's the pre-fab coop that we bought this spring.  You can see that the roof line has warped a bit but overall I'm pretty happy with how it worked out.  It was inexpensive and I have no building skills or free time to make something like this so it works well for what I'm doing.  Extra chickens went to the butcher this week and this coop is for a little breeding group of mille fleur bantams. 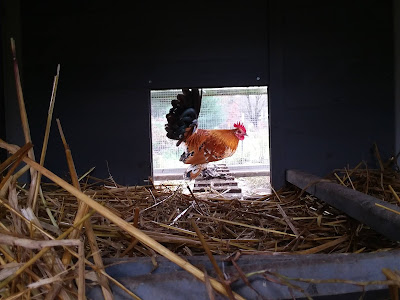 This guy has a bit of an attitude.  Good thing he's really pretty. 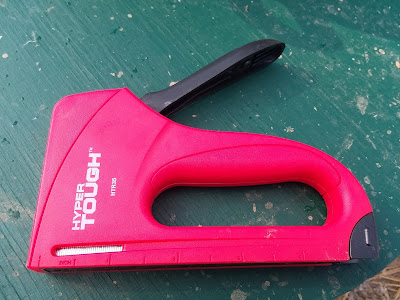 I was at Wal-mart the day before tackling this project and decided to spend the $5 on an extremely cheap staple gun instead of tearing apart the basement trying to find one of ours.  Best choice ever.  The guns that we have are big, heavy metal tools.  I have normal sized hands and they're really hard for me to use.  This thing is small, lightweight, cut my work time in half and my hands didn't hurt when I was done.  Time for my own toolbox. 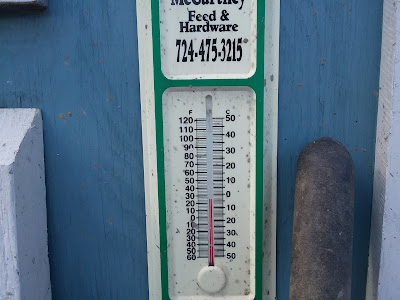 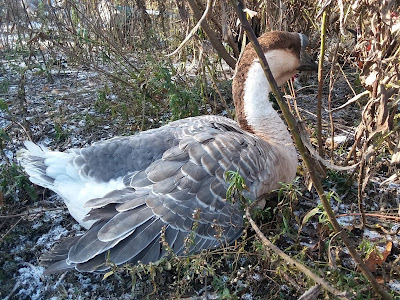 So my favorite gander is injured, again.  I found him like this; fluffed out and not wanting to move.  When forced to move he hops.  I left the geese out last night and yes, we have been having raccoons again, but when I picked him up and checked him over there are no visible injuries.  I put food and water directly in front of him and he ate and drank.  He spent the entire day sitting here and I carried him to the goose shelter at dusk.  The only clue is a tuft of  goose feathers at the end of the chicken ramp near the water barrel   I am honestly wondering if, with the cold snap, he just slipped on ice.  That sounds ridiculous but the geese regularly trip over things like grass and sticks. 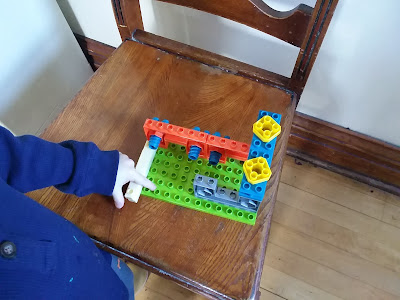 When I finally came inside to thaw our oldest presented me with this, a new chicken coop.  He had made it for me while I was outside.  Here he is pointing out where the chickens go in. Oh, be still, my heart.
Posted by Cottontailfarm at 3:43 AM