The start of summer; gardening, predators and other such 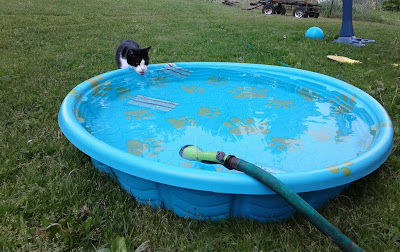 Bee takes a break to cool off and have a drink.

It's been wicked hot here the last week, in the middle 80's.  Which I guess is not too terrible but enough to keep us inside through the heat of the day. There's been a lot of playing in the wading pool and eating popsicles on the porch.  Any work I am doing in the garden is during the early and late hours of the day. 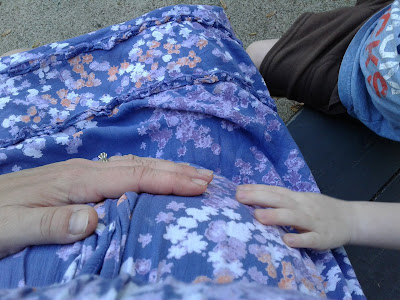 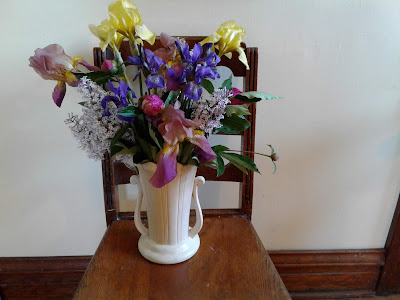 Flowers cut from my mother's gardens.  These irises are my favorite and I'd like to transplant some of them over here. 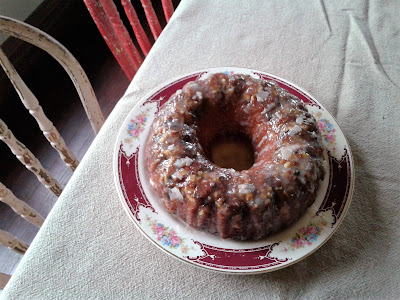 The little man and I made the family famous Bicardi Rum Cake for my father's birthday today.  Little man was super confused about the bat on the Bicardi bottle: "Is bat juice?"  "No, honey, it's not."  I accidentally discovered that if you let the gaze set up a bit in the refrigerator it makes it much, much easier to glaze the cake. 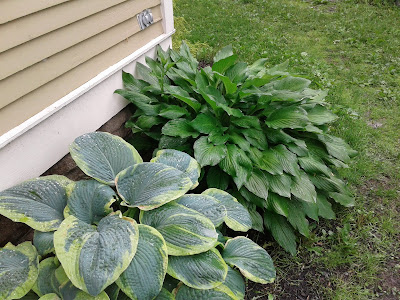 We finally had a nice, steady downpour today.  The ground really needed it; the soil in the garden was starting to crack. 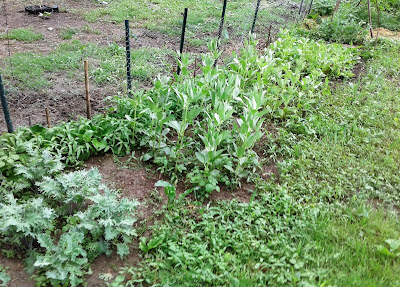 Kale, fava beans, lettuces, snow peas.  Behind the fence is flowers and winter squash.  That green area is just being mown, not attempting to mulch the whole garden this year. 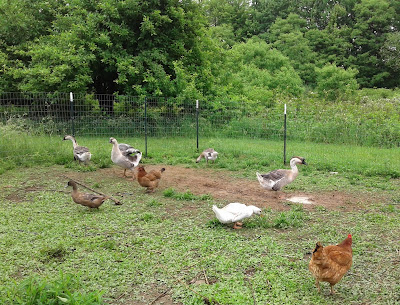 Poultry yard is filling in nicely.  The baby goslings sent through the mail are huge.  The only way I can tell the difference between the babies and my mature female is by the feathers; they are close to the same size now.  We've had a rash of raccoon attacks this month that I haven't been excited to talk about, it's been pretty horrible. Picture a raccoon dragging a full-grown goose around by the wing horrible, and me running out there pregnant to chase it off while screaming profanities.  I would have killed it with my bare hands if it hadn't run away. We've lost two ducks and had another duck and a goose attacked.  It's not been fun.  We're doing what we can. 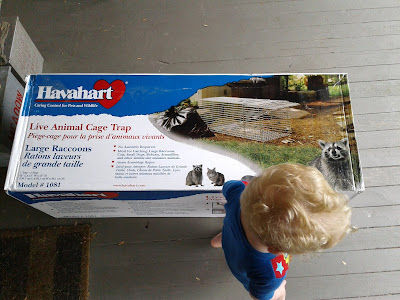 Shelled out the money for one of those HUGE Havahart traps that you can fit a miniature goat in.  It was a considerable expense I should have invested in years ago, honestly.  Except that when we got it out of the box it was heavily damaged and had to be returned.  The company I ordered it (Home Depot) from said we can expect another one tomorrow and knocked $20 off the price of the replacement. In this day and age where crappy customer service is the norm, we were really pleased with that. 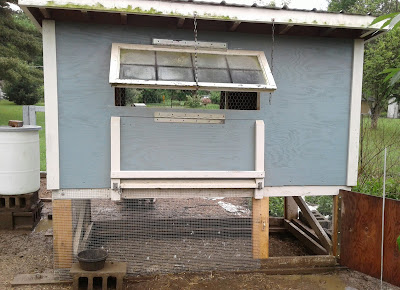 This is the back of the chicken coop.  My father and husband turned the space under the coop into a safe, predator-proof area for the ducks and geese to sleep.  I had been trying to rig something with an old A-frame coop and it was miserable.  The door has a barrel latch and the whole enclosure is 1/4 inch hardware cloth.  It's dry and shaded under there and tall enough that even the big male has plenty of room to stand.  It was a wonderful gift from people who love me.  Probably they were motivated by the fact that neither one of them wants me messing with possibly rabid raccoons.

Also pictured; they made me a water barrel!  It hold about 40 gallons and has a handy spout on the other side.  Eventually it will be connected to a gutter and downspout on the coop.  For now, it saves me hauling water out there in buckets twice a day.  These two modifications have made the poultry yard a downright pleasure to be in. 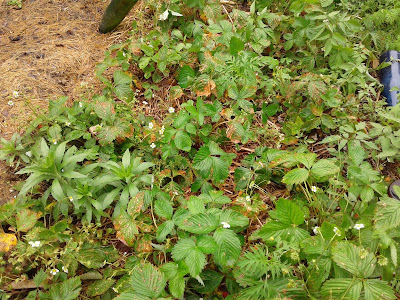 Our beloved Alpine strawberries look horrible.  A google search of these rust spots leads me to several possible fungal culprits.  Which doesn't make sense because sources say that they're triggered by damp and wet - the exact opposite of the hot and dry weather we've been having.  So the berries are not being eaten by us, but picked off and fed to the quail. 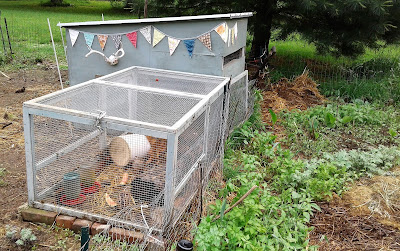 Who have moved into their summer vacation home; the quail tractor butted up flush against the old duck coop.  It gives them about 10 times the square footage they are used to and they seem pretty happy with it, although they've spent most of the time hiding out in that old crock.  Quail are odd in that experience has shown me that they really do prefer to stay in a tight group in a smaller space.  There are also some logs to climb on and hollow logs to hide in.  They're just starting to use the old duck house during the day. 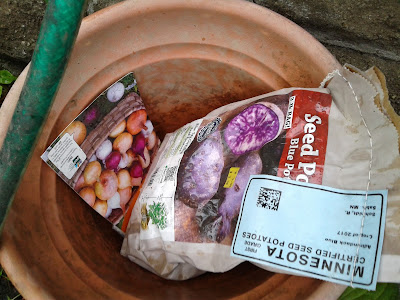 The garden is 99% planted except for these beauties.  Honestly, there's no room left so I'm not sure where they're going.  There's always an empty corner somewhere I guess.

Here's to summer, so glad it's here.

Posted by Cottontailfarm at 11:26 PM