Toddlers in the kitchen

We've been spending a lot of time in the kitchen this last week.  A lot of time.  The little man's favorite activity is to "stir it up!" as he calls it.  Usually this is announced as he's pushing a chair across the kitchen floor towards the mixer, leaving me to think fast about what we can make.  Who could refuse? 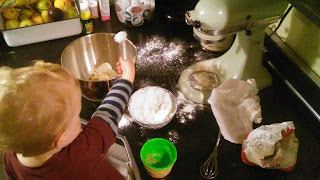 This week alone we've made brownies (twice) and homemade bread 3 or 4 times.  Looking back at this post on how we make bread I cannot believe how fast the time has gone.  He and I have been baking this bread together for over a year.  Wow. 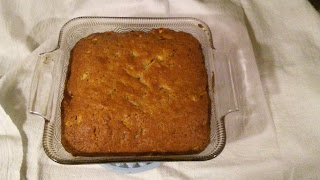 We made an applesauce cake.  I think it was this recipe here but as we were adding things into the mixing bowl I realized we didn't have enough applesauce so we threw in a jelly jar of home canned apples and also someone's half eaten banana.  Plus extra eggs.  Everything is getting extra eggs even things that don't call for an egg.  It turned out ok.  The cake had a great flavor but the recipe called for raisins which just seemed out of place and odd when you bit into one.  Or, as someone else put it: "yeeeeYUCK!"  The chickens got most of it.  We might try it again, minus the raisins. 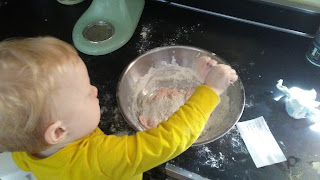 Want to play with play dough?  Sure. Grab your chair and we'll stir up a batch of that too. 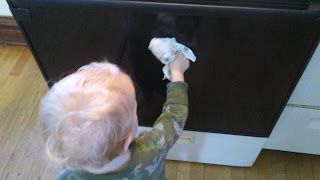 Cleaning up.  It's always a wonderful mess.

When I moved into my first place during college I didn't know how to cook anything at all.  Heating up something from a can, browning ground beef and using a microwave were the total extent of my skills.  It took a very long time before I got over being intimidated by the kitchen, worried I'd screw something up and ruin it.  Now I realize that unless you burn it, food + food will almost always equal  something edible.  Even baking (which can have a reputation for being fiddly) most always works out even when we make up half the ingredients and don't follow directions.  That's a really freeing realization.

It's been a fun journey and there are few things I'd rather do now then be in the kitchen. Creating is such a rewarding process and it's something I love sharing.

Mostly were are baking from scratch because there are more steps to enjoy but the boxed mixes (like brownies) are nice because we look at the pictures of the necessary additions (ex: 3 eggs) and can count them and match them to what's on the counter.

The little man is at a point now where he loves being in the kitchen too and is getting pretty proficient at the skills we've been working on.  We have been adding new jobs as he's ready (like cracking eggs into a bowl neatly).  I feel really blessed that we get to share this time together.
Posted by Cottontailfarm at 9:36 PM