We had a lot of snow this week and I was feeling bad that the geese didn't have a designated shelter. There's tons of brush for them to snug up in and the old A-frame coop but I worried that they were cold. Yep, sitting out there with lots of fat and tiny down jackets I would lie awake at night and worry about the geese. Everything I've read said they won't use a shelter and the woman I bought straw off of this week said hers won't even go in the barn but I still worried. Possessing no carpentry skills I took some old feed sacks and the staple gun outside this week and completed a magnificent display of craftsmanship henceforth known as the crap-tastic goose shelter. 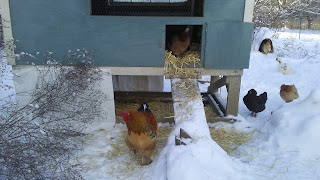 It's just feedsacks closing in part of the underside of the coop. 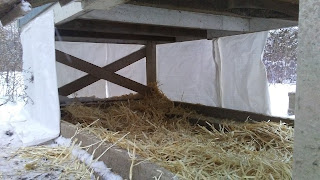 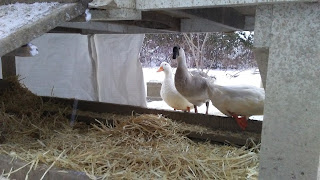 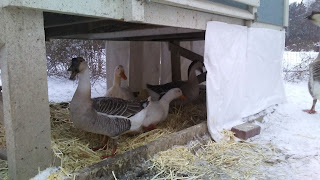 Added another panel to the back after shooing everyone out.

The verdict? After the initial excitement wore off... Yeah... I haven't seen anyone but chickens in there. Oh well. At least they have it if they want it. 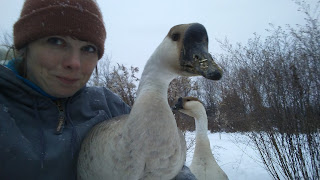 I do love these birds. I think I have two geese and a gander. The geese are still sweet to me and the gander ignores me. So far.  Secretly hoping for some goslings come spring!