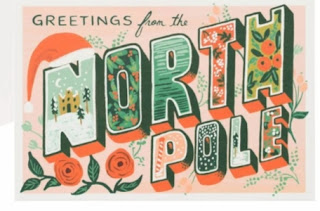 These beautiful postcards came in the mail yesterday.  I love Rifle Paper Company products but they're usually expensive. This pack of cards was only $10 for 10! The style of card is called Large Letter for obvious reasons. It was a very popular thing when cards were regularly sent from vacation spots, it was so fun to find these.  I kept one to frame and mailed one to my dad who is a card collector.  Then I made myself this: 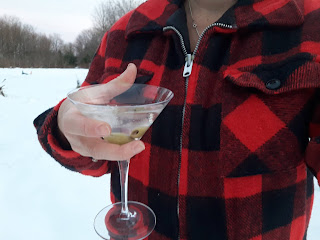 We had no ice. But we do have snow. 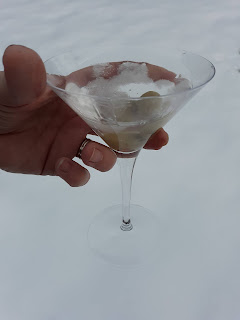 It's a snowtini!
Two snowtinis later I got the idea to post a message on Postcrossing about the cards. 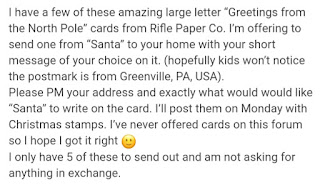 The replies were interesting.  One person asked if Santa could wish her older dad a Happy Birthday as his birthday is the 24th. One person asked for a card for their child, could I talk about life at the North Pole and the reindeer, especially the one named Rudolph? The other three were from adults hoping that Santa could write them some encouraging words as 2020 has been so difficult.  The cards are going to Slovakia,  Singapore, Germany and Indonesia.  One is also going to my sister's children to let them know the Elf on a Shelf has been reporting back to Santa.
So this is what I will be doing for fun today, minus the snowtinis. Because nobody wants a letter from a drunk Santa.
Posted by Cottontailfarm at 12:06 PM