Yoga, a book, birds and stuff 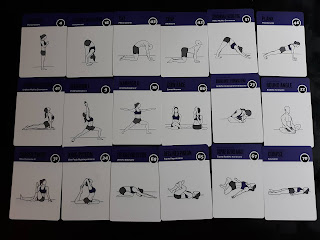 Yesterday the oldest had spent the night at Grandma and Grandpa's so it was a very low-key morning. The little guy and I did this yoga sequence from my deck. It took about 20 minutes. It felt really good but some poses were definitely ambitious pregnant. Like any of the pidgeon poses. Just not happening for awhile I guess.

Finished a book this weekend: 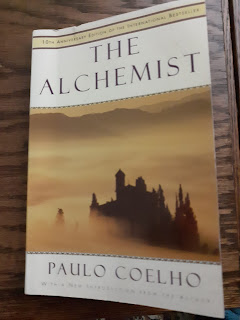 If you haven't heard of it here is the back: 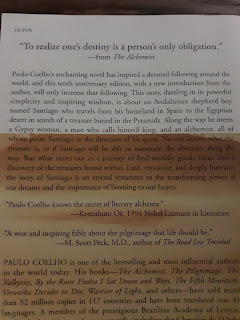 It started off promising but I couldn't stand it by the end and only finished it because I was mad over the time I had already spend reading it.
If you didn't quite at first understand the author's phrase "Personal Legend" don't worry because it's going to be repeated about once a page.  Then the ending felt totally slapped on and made no sense in the context  of the story (after going on this huge spiritual journey and finding he could literally perform a miracle the "treasure" he's been chasing turns out to be a chest full of gold and other material possessions). It did have some interesting bits that I dog-eared and  kept rereading like this one:

Here are pictures from our creek walk last week: 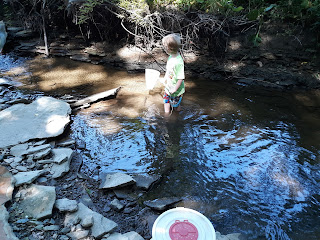 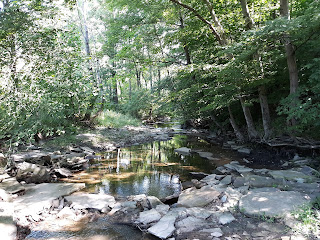 It was really beautiful. We went to Walmart together the other day to pick out a Lego kit. Here we are with me trying to get him to pick out a shirt for himself, any shirt.  It was his first outing to a store in months.  It made me feel sad that he got so excited about it because he's missing out on so many "normal life" things now.

The garden is doing well except for this: 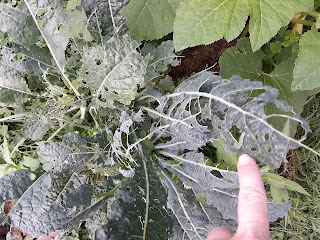 All of the beautiful kale is being destroyed by caterpillars.  It's discouraging . I do like kale and hope this gets better as the season goes on.

Here is how the story of the chicken in the shed ended. Of her 20 eggs I took half for the incubator and moved her and the others to a safe location in the old duck coop. 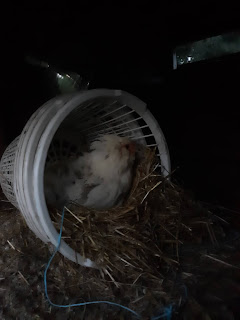 I was able to hold a scrap of fencing over the basket front and carry the whole thing. She was furious.

And here is how it worked out: 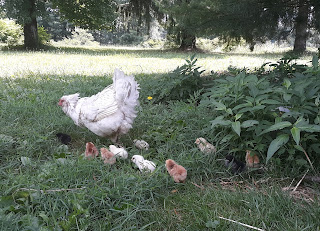 She hatched all 10 of her eggs. The poor thing really does look that ragged. Chicken pregnancy is no picnic. 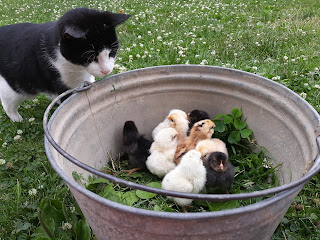 I hatched 9. Who have already been listed on Craigslist because we already have too
any birds.

Don't tell that to this one: 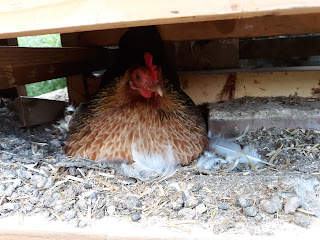 Who may have heard chicks peeping from across the yard and is now determined to have babies too. How many times have we gone through this, she and I? Twice or three times a season for three years? She's the only bird whose mental health I give two hoots about so I just patted her on the head and let her keep the eggs. She's so maternal that if she were denied the chance to have chicks she'd probaby try to steal my toddler and sit on him. 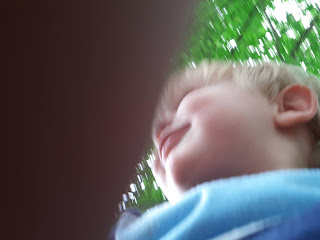 His new hobby is running of with my phone when it's on the camera settings.  We have approximately 3,256,387 photos like this now.
Posted by Cottontailfarm at 11:47 PM