What's missing from this picture? 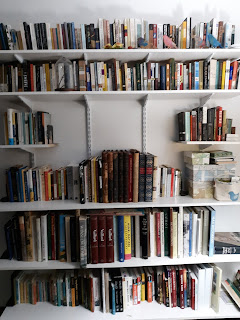 This is a terrible nightime picture, and we need to fix the shelf and actually arrange things but the answer is "the television ". The television is missing. It's about time. Husband and I determined the other day that probably 99% of the household bickering and stinky attitudes were related to the television.  Or rather what the television was not providing; physical activity, imaginative play and reading. Granted I think we did mostly ok with limiting what the kids were watching but let's be honest a person can only handle so much Paw Patrol. I had already banned Curious George, my own personal Hell.

So while the kids and I were at my dad's the other morning (the oldest and I had another creature adventure in the creek) my husband put the television somewhere.  Possibly the garage. Don't know and don't care.

My husband and I went for years without a television and were perfectly happy. It was by choice not poverty. If we really, really got the urge to watch Jeopardy we went to my parents house. But the thing is when people notice the lack of a television in your house they try to hard-sell give your their old ones. Maybe out of pity. We refused several before we allowed this one in the house and I don't remember whose hand me down it was, possibly my in-laws.

So the television dissapeared.  Guess what happened? After a minor tantrum the oldest got over it and we read, no joke, over 20 stories yesterday. 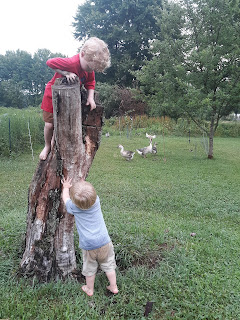 Today we sat on the porch in the rain and when it was done the kids went outside and spackled this tree stump with mud for over half an hour. They were wet and dirty and happy.  I mean, we do this kind of stuff anyway but now we'll be doing more of it. 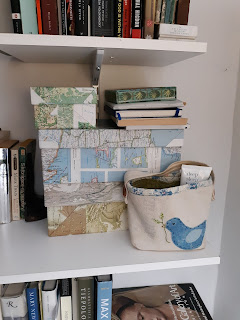 Plus! I also have this little corner for my "after the kids go to bed" stuff: a sewing project, Postcrossing supplies, journal, current book and a deck of cards.

Who knows how long this will last. Hopefully for awhile.
Posted by Cottontailfarm at 11:12 PM