It snowed today. Again. Where is spring? It was nice earlier in the week.  Oh well. It does feed the soul to see things growing and I'm grateful for it. 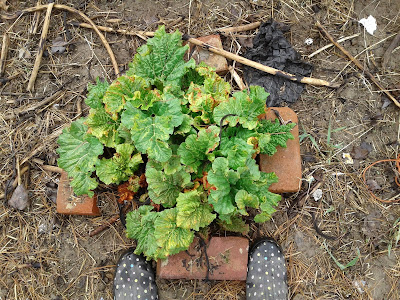 I think this picture was from the weekend. The rhubarb looks great already. So much green! 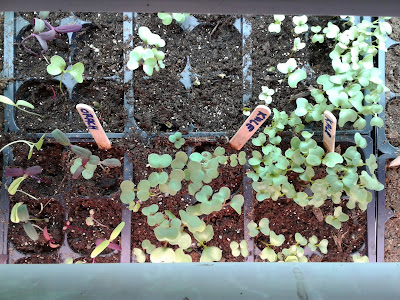 All of the cold crops are doing well under the lights in the basement.  There must be about 100 kale seedlings coming up.  Whoops.  Two varieties, I don't remember the names but one is blue and the other purple.  The plan is to plant them decoratively in the garden and then them feed them to the poultry throughout the season.   I refuse to spray vegetables due to 20 % principal / 80% laziness and whenever I grow kale it is quickly covered in tiny caterpillars - the exact same color as the kale leaves.  It does put a person off  badly to find them in a salad.  Luckily kale is easy to grow and the chickens/ducks/geese love it.  Even the quail get into it - they can't get enough of the tiny caterpillars. A win for everyone. Except the caterpillars. 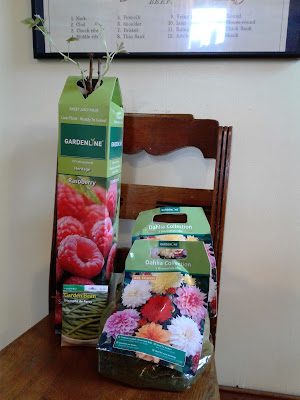 Impulse buy at Aldi's today.  The dinner plate dahlias were $3.99 for 3 tubers - crazy!  I got the last two bags and am excited to see what colors they turn out to be.  The raspberry plants were also an impulse - they look healthy and were 2 for $5.99.  When we moved here I planted a row of blueberry bushes and two of them have not bounced back after getting mowed down by deer - the plan is to dig them out and put the new berry bushes in those spots.  (Dear friend L who has graciously offered me raspberry bushes - if you are reading this - I think you will understand that it's sometimes easier to just buy the plants, plant them and then feign ignorance than to explain to a spouse where a plant will go, how it will be pruned etc. and so forth. Am I right?)  The bean packet in the photo isn't really something we needed but I had a coupon at TSC for a free seed packet, so there you go. 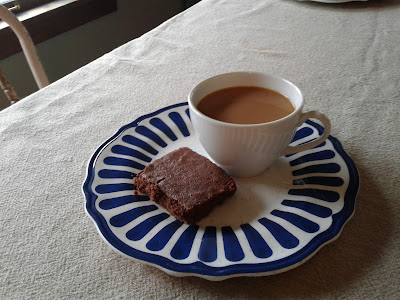 Oh, what else.  The little man and I made scratch brownies today from the recipe on the King Arthur Flour bag. 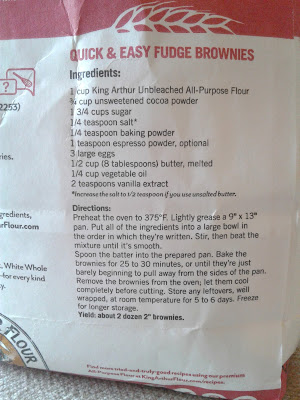 I don't know who considers these "fudge" brownies.  They are good and do have a nice complex favor (due to the coffee probably).  The recipe calls for espresso powder and we only had instant coffee granules but it worked anyway.  There are a lot of good things about this recipe and it's a keeper, but we're going to play around with it and see if we can get it a bit more "chocolate" and dense.  Possibly just folding in some chocolate chips and baking in an 8x8 pan would do the trick.

A lot of cooking has been going on which I'll post about at the end of the week.  I had to get rid of a drake last week and he rose to glory in two dishes.  It was also the opening day of trout season last weekend and there's a trout dish to share. But enough for tonight.  There's still a kitchen to clean and then off to bed.

Posted by Cottontailfarm at 11:00 PM