Ever since we moved in here we've had skunks on the property.  I remember the first summer coming back to the house from our fire pit at night and seeing a baby skunk hanging around the corner of the house.  It was adorable.

Sure, OK, they smell but they're also chubby and waddle when they walk.  And I love them because probably half a dozen times they've dug up and eaten nests of yellow jackets that we didn't even know we had.  Just dug up nests and dead wasps bodies in the morning.  That alone makes them worth their weight in gold.

And they're beautiful.  I mean, would you look at this? I kinda just want to pick one up and squeeze it. 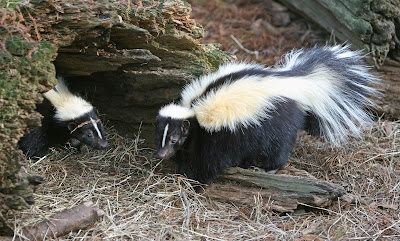 Lately though, we've been having a skunk issue of sorts.  Bee has been coming home at least once a week smelling like skunk.  She's never been sprayed by one, she just smells vaguely like she's been in the same area as a skunk.  Napping near a den or worse. 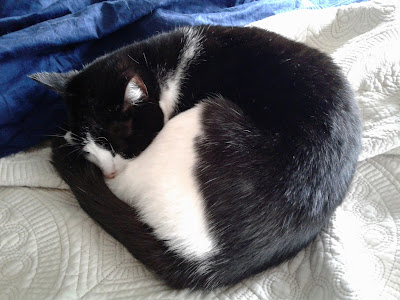 It's been happening so regularly that I am actually starting to wonder if a bit of this has been going on: 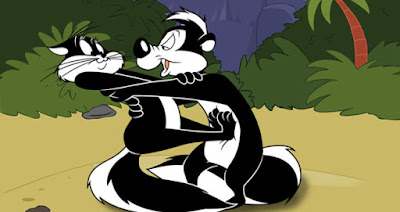 I'm having a hard time coming up with another theory. What do you think Bee? Anything you want to tell us? 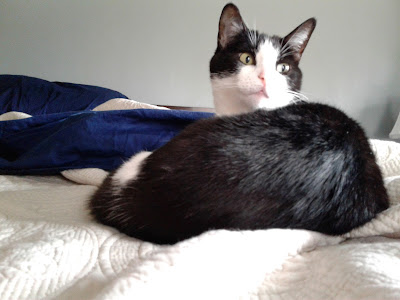 I've looked on-line thinking someone somewhere must sell wipes for pets that take away a skunk smell...... and can't find anything.  Bee acts like an enraged badger if you try to bathe her and I'm not even attempting it.

The geese have been trying to nest and their eggs keep disappearing.  Guess what I caught last week in the Havaheart trap? A skunk.  It looked really, really sad.  So I let it go.  Is it true that they have to be able to stand up to spray you or is that just urban legend?  I have already been told that If I get sprayed messing with one I am not allowed back in the house.  So I crossed my fingers and hoped for the best.  The trap was covered with cardboard and I opened the trap door and set it.  The skunk just blinked at me.  "Go ahead, little buddy! Waddle out the door! It's open!" He just sat there.  I sighed and came in the house.  When I went back outside to check after lunch Nigel was sitting sadly by the trap and two of his hens had managed to trap themselves in it.  Not one, but two.  I have no idea.  Chickens aren't the brightest. 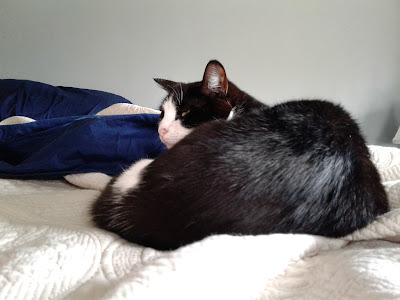 Neither is the cat apparently.

So, the skunk is still out there waddling around.  Bee still smells.  She's currently napping on our bed.  I wonder how long this is going to go on? 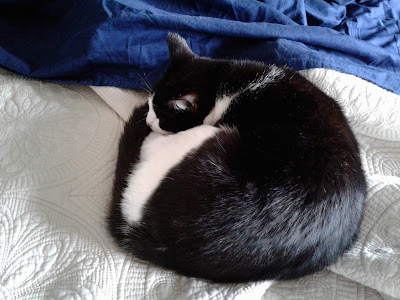 Posted by Cottontailfarm at 4:51 PM