The saga of the apples 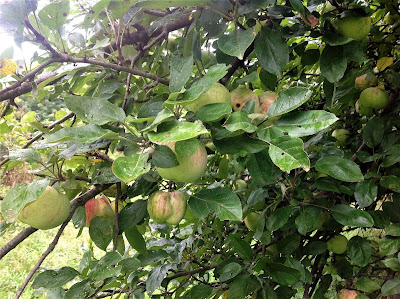 There are three generations of apple trees on this property.  The oldest of which were tall, gnarled half-dead and hollow in the center, yet still producing apples when we moved here.  We live on a high ridge and it was amazing they had made it to that point. They were tired giants and two of the tree have fallen in wind storms since we took hold of the property.  The last of those ancient trees is a Yellow Delicious; totally hollow in the center, surrounded by blackberry brambles, groundhogs living in the roots but still it stands, for now, and still producing heavily every year.  It's an eyesore but we refuse to get rid of it.  That tree, we are sure, was planted long before our house came to be.

When we moved here I tried in vain to plant an orchard.  Repeatedly.  The hill we live on is an old mining ridge and the soil is very poor, full of clay, and veins of coal run through it (there is a black patch in the yard where nothing will grow).  Let me see if I can remember what I have planted (and killed) in the last 5 years: a cherry tree, 2 kinds of pears, plums, several peaches, a Granny Smith apple, a Honeycrisp apple, and a McIntosh.  The McIntosh is the only one still standing - and fruiting.  All of the others died from the poor soil or the severe drought the years they were planted. 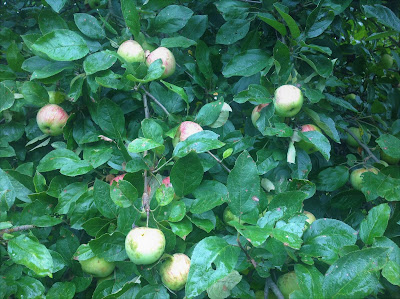 But.  There is an old orchard line that runs between the property our house sits on an the adjoining one we purchased.  Someone planted apples here.  They are fully mature so we think it they were planted around the time our home was built (1930's).  Some of the varieties are easy to identify (McIntosh) but others are a total mystery. 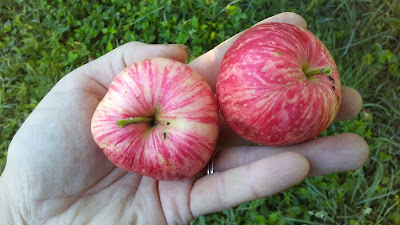 Like this one.  Still have no idea what it is. 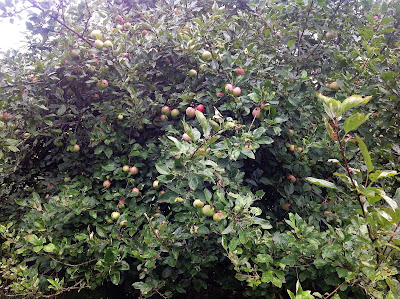 That planting of trees is bearing heavily this year.  My little guy almost always has a half-eaten apple in his hand when we are outside because he knows these trees too, and makes a bee-line to the back of the property when we go outside.  He wants his apple.  So do I. 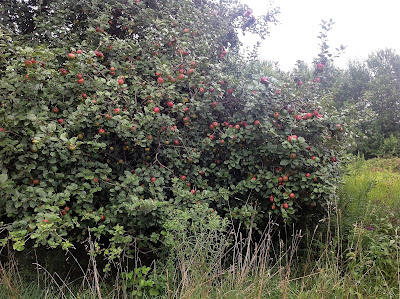 The trees are sagging under the weight of the fruit.  I find this curious because my father's orchard across town is barely producing.  But here they are.  Time to make cider, apple cider vinegar, applesauce and pies.

Our family has a cider press that my grandfather built.  Not from plans, he just looked at a picture in a catalog and put the thing together.  Talk about an heirloom..  It started out as a hand-crank model but a motor was quickly added.   Our family has been pressing cider on it for over 20 years now.  We had a big cider day when we first moved here, setting up a tent and inviting friends and family to bring apples and pears to press.  I think we did 80 or 90 gallons over a three day weekend.

I think of the orchard on my grandparent's farm - trees that were mature, old even, when they bought the property in the 1950's - and wonder how many old unnamed varieties we are losing every year.

We live in an area of the county that John Chapman, aka "Johnny Appleseed" came very close to during his time. If you are interested in apples at all, you will probably love this: "The Real Johnny Appleseed Brought Apples—and Booze—to the American Frontier"
Posted by Cottontailfarm at 10:49 PM