Garden in May, homestead overview

You can see most of it in these pictures: the garden, the coops, the crap-tastic PVC tractor.  Laying it all out there.  Because agricultural people get it, right? The wine bottles, the chickens, the deer antlers.  Yeah, it's rural life.  Love it or get the hell out.

Here is a very short tour of what's happening in the garden at the end of May.  Our vegetable garden is about 35 x 60 feet, split into 3 sections.  You can see where the fencing has it split into thirds, with a poultry pasture in the center section. Not included in that measurement is a duck run running along the back length which we will discuss in a moment. So really, about 50 x 60 I would guess total space. 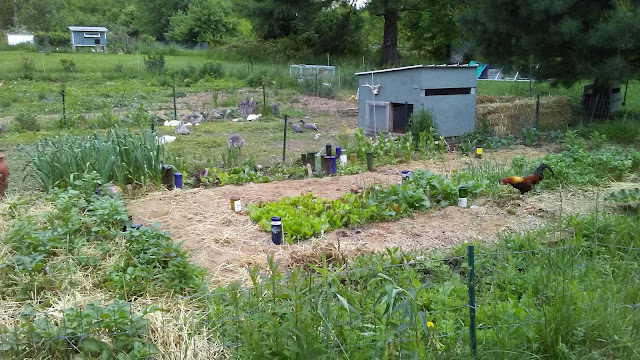 Here's where most of the action is happening now, on the south end of the garden (the "spring" side).

Here's what we have going on: 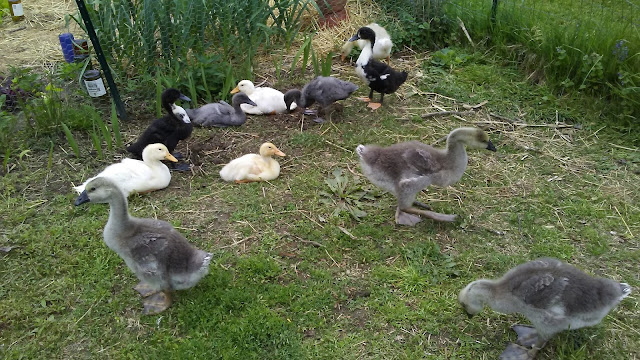 Here's a good picture of the middle of the garden, the "duck run".  I love having some birds up by the house because I can watch them outside from the dining room window and, wow, are they pretty. Here's a picture of last year's poultry pasture in all of its glory.  Basically I sow the whole thing in buckwheat, clover, a grass mix and whatever expired/not-gonna-use-them seeds I scrounge up.  It's filling in really well  and the geese are getting a ton of free food out of it.

Side note - I sold the two Swedish ducklings along with some peeps this weekend.  Damn it, I REALLY liked them and those ducklings were so cute that I KNEW I would never be able to put them in the freezer.  But this isn't a petting zoo.  I have to be able to justify everyone on this property (to myself) as a contributing piece.

So they went to a lady who literally squealed with happiness when she saw them.  I didn't mean to sell them but she answered my ad about the peeps and asked if I happened to have any ducklings too.  And I had to admit, yeah, I did.  I sold her the ducklings and 12 chicks born from the epic peep hatch  = a 12 pack craft beer and about 100 lbs layer mash. 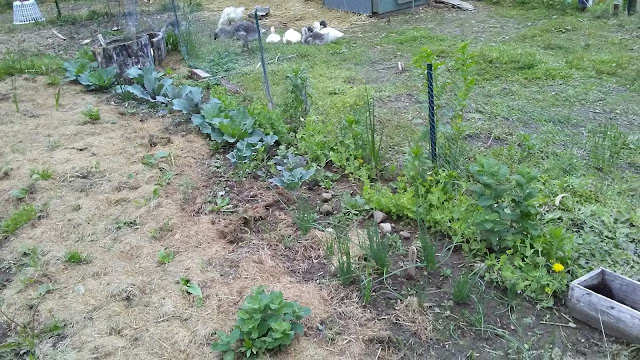 Ok, here's what I've done on the left (north) side of the garden.  Not much.  Only one row planted.

Snow peas (up about a foot), shallots, onions, broccoli, two kinds of cabbage.  That section of apple trunk has planted in it: thyme, chives, parsley.  Also some invasive garden plants: mint and borage. 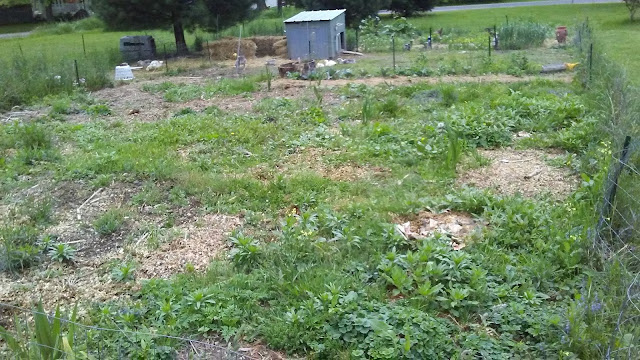 The rest of that side of the garden is a hot mess. Here's the thing.  I've been mostly no-till for awhile now but things have gotten away from me and now that I NEED to till -  MY TROY-BUILT TILLER WILL NOT START. It hasn't been run in two years and although my husband has changed the spark plugs and changed out the gas it won't fire.  Damn it anyway and I am starting to quietly panic.

On to more soothing things: 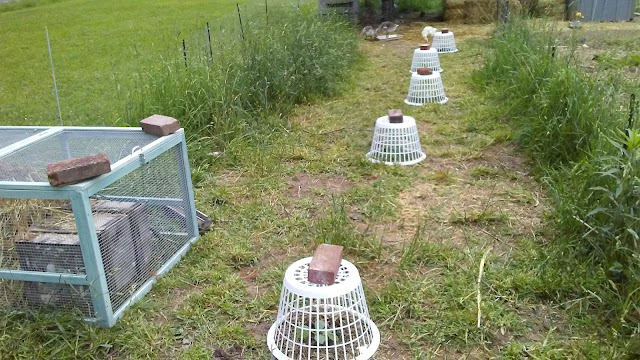 I expanded the fenced- in run to the back of the garden.  It now measures about 15 ft deep by 60 feet long. The waterfowl have the run of it and this is where the winter squash will grow, god willing.  I attempted to do this last year and the turkeys could not resist the dirt the squash were planted in and killed every single plant.  Then we ate the turkeys.  But I digress.  I've learned from that - hopefully - and this year have planted the winter squash - 10 varieties total- and covered them with plastic baskets from the dollar store.  I am really hoping that by the time they need the covers removed, they will be big enough to withstand the poultry.   If not? I'll think of something. 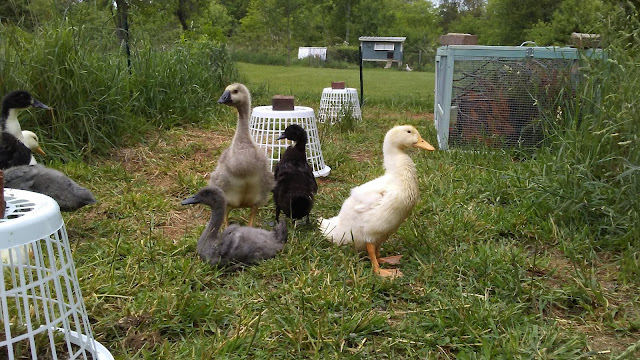 The crew investigated immediately.  Here's the quail pen in the poultry run. All of the hens have started laying - and look! - one is laying legs with an aqua tint.  They are SO pretty. I'm starting to gather them for the incubator, as we've eaten all 21 of the quail I harvested from the first batch. 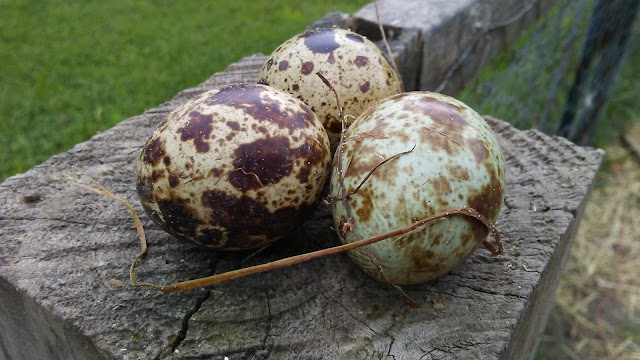 Well, that's it,  Hopefully we can get the tiller going because all of the seedlings I grew aren't getting any fresher.

Excuse any typos as my husband and I presently are having a bottle of wine and a Bruce Springsteen dance party. Who loves life? Right here, folks.
Posted by Cottontailfarm at 11:09 PM