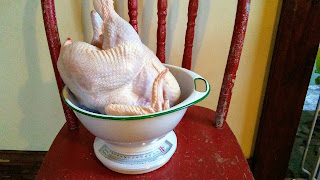 The first batch of meat chickens, 6 Cornish Cross, were sent to the butcher last week. They were 7 weeks old which was a bit early - it's more typical to butcher them at 8 from what I've read. 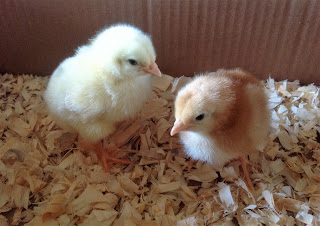 Back when they were babies - the white one is a Cornish Cross the other is a Red Ranger.

This was my first time raising them, in the past we've done the slower growing Red Rangers.  At first I was sure I would hate these birds. They were so food driven for the first half of their lives that if the feeder ran low they would literally run up and bite at me when I went to feed them. Not peck at to investigate, but actually bite.  Trust me at no time were they starving. It's in the breeding.  These birds are designed to get so big so fast that I was warned that their legs would give out under the weight of their bodies if their feed wasn't managed.  Still, they blew through feed. Thank goodness we have a local feed mill that sells excellent freshly-ground mash for about $14 per 100 lbs.  I mean, when you open a bag of this mash, it smells like actual food.

They were fed three times a day and once they went out on grass in the chicken tractor I started scattering feed on the ground as well so the would have to scratch and search once they got all the easy stuff eaten. It gave them something constructive to do and taught them that food could be found not only in the dish but in the grass too. 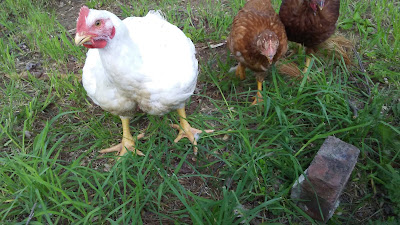 They acted mostly just like regular chickens if a bit lazier. They pecked, they scratched and took dust baths.  They sunbathed. During the last week they were getting a treat of something,  I think the little man's leftover breakfast, when I heard an odd noise - one of the roosters had a toast crust in his beak and was calling over the hens.

They got so huge that I started to worry that if they weren't butchered soon we'd have losses. In fact, the day I took them to the butcher one of the roosters was starting to get a slight limp. They were starting to look like feathered bowling balls. 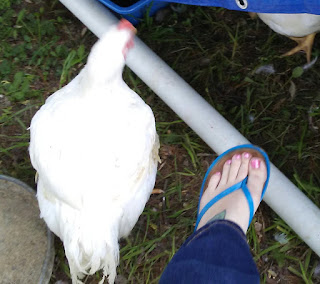 So, to the butcher they went.  I don't mind butchering one or two chickens but I did not have the time to do 6.  It's so inexpensive to have the local place take care of it.  We drop them off the night before and I pick up perfectly dressed carcasses the next day. 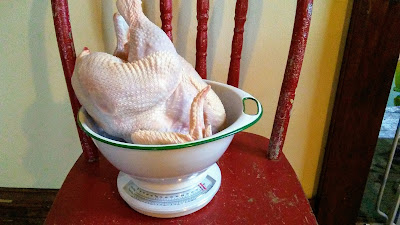 All 6 of them weighted between 5 1/2 & 6 1/2 lbs each dressed, mostly towards the larger side of that range. We had one on the grill and it was delicious.  A mild flavor than a heritage breed but still more "chicken-y" than a store bought one and with far better texture too.

I decided that since these were so large I would part the rest of them up and freeze them that way.  A couple of years ago we invested in a vacuum sealer, which is such a great deal if you raise your own meats.  It's a bit of an expense to buy the rolls of sealing bags but it completely avoids the heartbreak of opening the freezer and realizing your hard work has been freezer burnt. 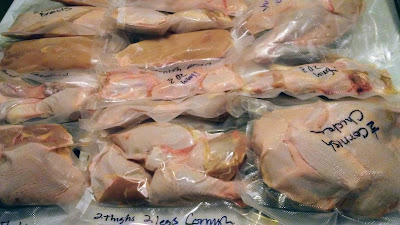 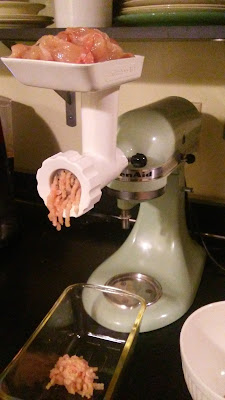 All of the trimmings went through the Kitchen Aid meat grinder.  We ended up with quite a bit of ground chicken. 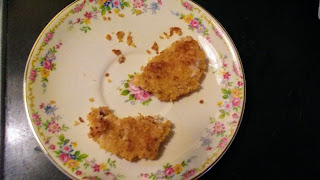 I made some into nuggets with panko crumbs and spices.  They were a huge hit with both adults and little people.  Finally, healthy nuggets! 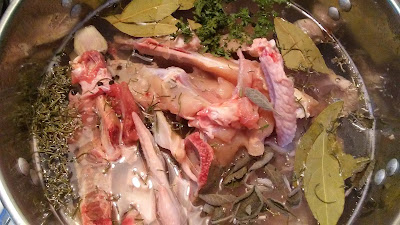 All of the carcasses are simmering away on the stove today cooking down into stock.

So, what did I learn?  I had some misgivings about supporting the whole industry and idea that is the Cornish Cross franken-chicken.  This is a chicken that is literally too large to mate naturally, and is the product of chicken artificial insemination.  They're not sustainable.  They are prone to heart problems and leg deformities simply because sometimes their bodies literally can't keep up with their rapid weight gain.

If I had raised these birds indoors for their whole lives I would feel like the product wasn't any better than something from a factory farm.  But.  They had better, more natural lives that probably 99% of chickens raised for meat in this country.  They were outdoors with more than enough space to wander around and do chicken things. They had the chance to actually enjoy lives as chickens  and I am more than ok with that.

Life increasingly forces me to be realistic about what I can and cannot do here.  Time and space-wise. A chicken that goes from peep to freezer in 8 weeks is what I have the time and (barely) the facilities for (if you can call my crap-tastic PVC chicken tractor "facilities").  The Red Rangers have another 4 weeks until I  can harvest them and although I'm getting my numbers down, the amount of birds on this property is starting to get to me.  Because...

There were plans in the spring to turn an area of our large steel outbuilding into a proper barn space but when I started clearing brush away outside I realized that the previous owners had ruined the ground by using that area as a huge rubbish burn pile.  They did this all over our 5 acres.  I unearthed nothing but broken glass and burned out mattress springs, nails, batteries etc. Because we had the adjoining building torn down last summer we didn't know the extent of the damage to this area until I got into it.  There is no way to put any living creature on that ground that doesn't include bulldozing out the trash and trucking in topsoil.

So the plan for a barn was scrapped and I decided to forge on anyway building a really ugly PVC chicken tractor and doing a lot of shuffling of birds (ducks, peeps) between makeshift shelters.  It's sucked, really, and I just want the majority of the birds in the freezer ASAP.

So, lessons learned.  I do hope to do another batch of Cornish Cross later in the summer when all of the extra ducks and chickens are gone.   Eight weeks is just about right.