The only "graphic" picture here is me cutting the breast meat off of a chicken.  No gore. No worries.

Oh, Silkie chickens.  Take a look.  Aren't they so pretty?  They look like big balls of fluff and are mostly kept for pets in this country.  But in parts of Asia they are used for cooking a special dish because they have... wait for it... black skin, meat and bones.  Yep.  Black.  If that isn't odd enough they also have EXTRA TOES. In fact, I read that when they're sold the heads and feet are traditionally left on so the buyer can be assured they're getting a genuine Silkie.

They're used to make a traditional soup with ginger, mushrooms and goji berries.  I wanted to cook that soup, bad, but in order to make it I needed the magic ingredient, the Silkie.  We live in the middle of nowhere so it's not like I was getting one at the local specialty market.  When Tractor Supply had chicks last spring I spotted two in the "Assorted Bantam" bin while I was buying meat peeps. Easy enough to pick them out because of the black skin and extra toes - nothing else looks like them.  There's not a lot of information out there about raising them for meat so I thought I would document my experience for anyone who may be curious.

I treated them exactly like I did the Red Ranger chicks, as in I did nothing at all special.  No special feed just chick starter.  Then when they were all old enough they were switched over to the regular layer crumble that the rest of my flock eats.  They lived in the poultry yard and ate greens, bugs, and kitchen scraps and ran around in the sunshine.  When the Rangers were butchered at 12 weeks the Silkies went too.  Raised this way, at 12 weeks they both dressed out at about 2 1/2 lbs each.  But they're bantams and were never going to be large.  To contrast, the Ranger chickens dressed out at around 5 1/2 - 6 1/2 lbs.

Here's a Silkie with no clothes on.  The skin is not black exactly, but more very dark purple.  The woman at the local processing place bagged the giblets separately for the two Silkies but didn't need to - they were also dark colored.  I guess sometimes Silkies do come in at the processing place - and the older employees use the "suprise" to harass any newbies who don't know any better.  As in "What the hell did you DO to that customer's chicken?!"  Oh, butchering jokes.  Haha. 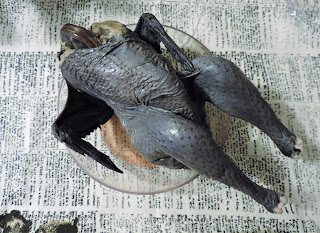 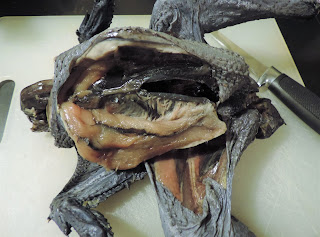 At only 2 1/2 lbs, I am able to get 3 meals out of one of these.  The first night I took the breasts and thighs off and made chicken piccata.  The meat was very tender and tasted like, well, chicken.  Tonight I made the dish I'd grown them for.  There are a ton of recipes for it on-line and I followed the directions here for Silkie Chicken Soup.  It includes the Silkie, dried mushrooms, goji berries and ginger.  I could not find red dates and there's something that creeps me out about ordering imported food via Amazon so I left those out.  Our local Aldi had goji berries for $4.99 around New Year's and I snagged a bag then. 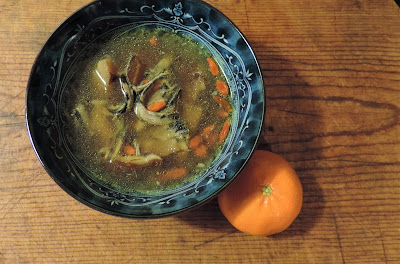 The verdict?  I am a very adventurous person when it comes to food but I actually couldn't eat this.  It might be a cultural difference but the mushrooms ruined the soup.  And I love mushrooms.  All of the recipes called for including dried mushrooms which results in a soup full of soggy, boiled mushrooms.  If I were to do it again I would saute fresh mushrooms and add those. The broth was very good though.  So meal #3 from the chicken will happen tomorrow when I use the strained broth to make something (rice?).  The cats also got a bowl of scraps out of it.

Also I found that I really, really like goji berrries so that's a bonus.

Posted by Cottontailfarm at 8:23 PM