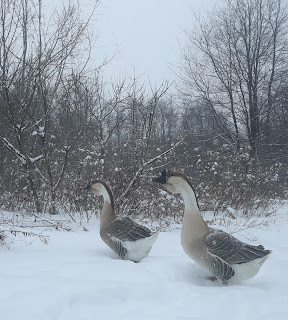 In spite of mask wearing, hand washing and not socializing like normal human beings used to, we have been sick anyway. Husband and I seemed to have gotten the worst of it and, yuck. Respiratory issues, fatigue, chills, no sense of taste or smell.
I had an appointment for a Covid test on Sunday but didn't make it there.  It snowed all day and our road was never plowed, plus turns out when you're actually sick you don't feel like driving 30 minutes in a snowstorm to reach the nearest rapid testing site anyway.  So I will be tested tomorrow.  I think it's just the flu.

When I woke with with an ear ache this morning on top of everything else it seemed a trip to the doctor to sort things out was in order.  So I called, only to be told that I would not be seen as they "were trying to keep sick people out of the office" but there was an antibiotic called in.

I'm complaining, I know. Our little family has been sick for months it feels like and I'm just so stinkin' tired of it.

The good thing that happened today is I saw a friend that I have not seen since November (because both of families have been sick constantly). She stopped by and we exchanged late Christmas gifts as we stood apart from each other out in the driveway visiting for a few minutes in spite of it being 20 degrees outside. I guess that's considered risky behavior now but it was the nicest thing.

It seems like this has been a really long winter and it's only January.

Posted by Cottontailfarm at 10:10 PM