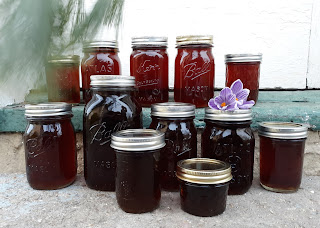 I finished up the sap, we ended up with a bit over a gallon.
Here is a video of the sap boiling for anyone looking at a desktop. NO idea why it doesn't show on mobile so here is a picture: 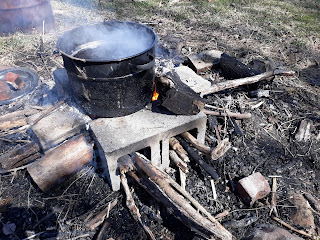 You can see that I don't use any "real" wood to speak of, just twigs and small branches that are fed through the holes in the cinder blocks.

Every time you heat sap, it causes minerals in it to solidify.  This is called niter and a sediment that falls to the bottom. 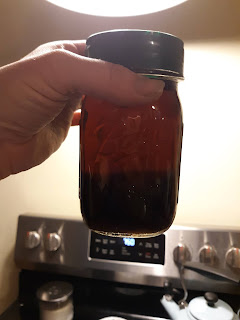 Gross. Most people filter this out several tjmes through the boiling process but I have yet to try anything that works well and doesn't take forever. So I asked Reddit and found an old timey method of gently heating egg whites with the finished sap. As the egg whites cook they pull all of the sediment out of the sap.
It looks absolutely disgusting. 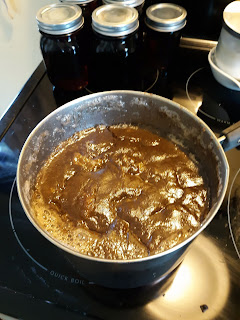 But after skimming the egg off the top and filtering it through a damp dishcloth it had worked like a charm. 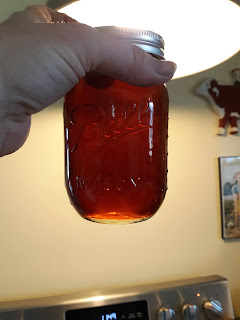 Maple sap is officially syrup when a candy thermometer hits 219. I pour it into mason jars and water bath them for 15 minutes for a shelf-stable seal.
So there you have it. When I think of the whole process,  tree to plate, it seems like a miracle. That these inconspicuous trees in our yard bless us with a year's worth of sweetness.   I cannot wait to make homemade maple donuts.
The kids and I raked out 2 flower beds this week. 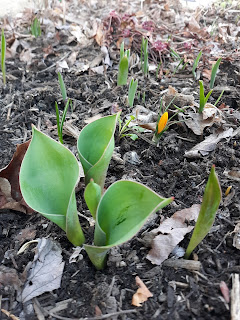 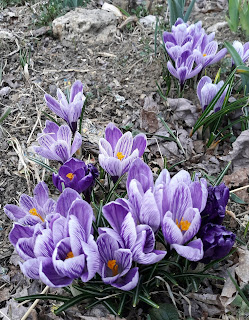 We have seen a few honeybees on the crocus, not  as many as last spring. In fact my dad across town lost all 5 of his hives over the winter.
Mr. H is taking these roses to his teacher tomorrow. 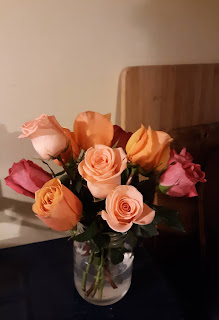 He picked out the bouquet today when I took him to the store. There was a bit of an incident yesterday where his kindergarten class was outside playing and were run up upon by a pack of three aggressive pit bull dogs. His teacher was nipped at getting the kids away and it was later determined that the dogs had already bitten someone else that afternoon.  The owner has apparently been located and fined. I wish I were joking.  So flowers are the least we can do.
Off to bed, morning calls early here.
Posted by Cottontailfarm at 9:35 PM