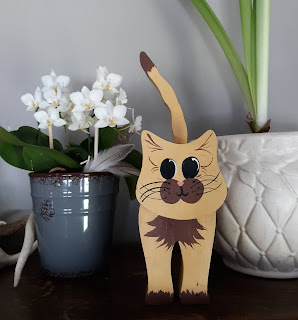 I found this wooden cat at the little local thrift store last week. It cost 50 cents and is not my style. I didn't really want it but absolutely couldn't leave it there either. My mom painted these cats back in the 80's for a local woodworker who sold them at craft fairs. I have memories of her assembly line painting them at night in the trailer kitchen. So it came home with me. Both of the older boys immediately claimed it for their own and had a brawl over it.  I told the husband he should count his blessings as my mom also painted wooden yard ornaments,  at least I didn't stumble upon a 3 foot wooden easter rabbit. 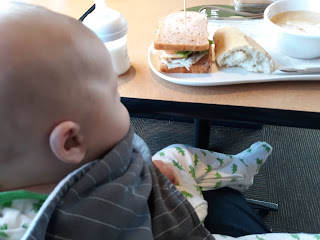 Baby P and I met our friend A and her baby for lunch at Panera's last week. It was so nice. A is a chemo nurse and vigilant about her health so we feel comfortable with these very, very occasional distanced visits. Baby P has been talking nonstop lately and was overjoyed to be around another little one speaking his baby language of "coo"s and "aga!"s. We caught up on our lives and exchanged late Christmas gifts. 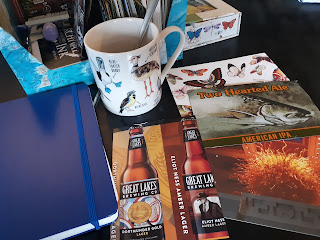 She gave me this "fowl language " coffee mug. It's adorned with illustrations of poorly named birds: the blue footed booby, the titmouse, the oxpecker, the woodcock. It's vulgar and hilarious and I love it. 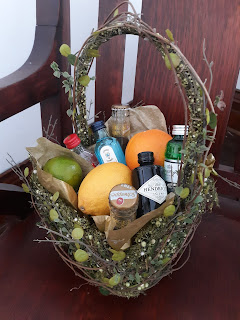 And my friend L suprised me today with a gin and tonic gift basket she made me just because.  It's so sweet. We met for a masked, no hugs coffee today and it was such a nice visit. It really has recharged my soul to see friends.
The first of the vaccines have arrived.  Our town recieved 1000 of them, for persons aged 65 and older, and all of them were claimed in the first 90 minutes.  When I took the kiddos to my inlaws today we drove past the church where the vaccines were being administered.  The parking lot was packed and there was literally a line of cars down each side of the road waiting to enter. And I burst into tears. My father and both my inlaws will get the vaccine next week. It's been a long year.
400,000 + Americans have died from this in less than 12 months. 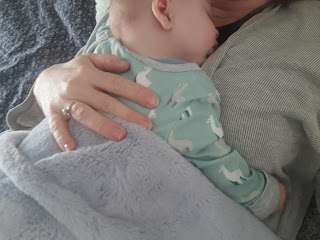 This is baby P and I watching the inauguration. What a sigh of relief. 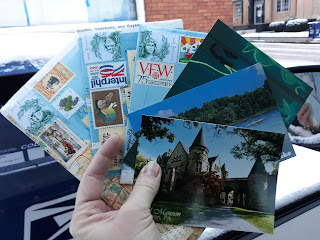 I've thrown myself into Postcrossing. Pretty much it's the perfect hobby right now as it can be done in 5 minute bursts. Also it's nice like Christmas to have tiny gifts from around the world show up every couple of days. Yesterday we got a card from Tahiti.  I've discovered the forum part of it with mail games and exchanges. Here are some cards being sent out, playing card trades and a penpal letter to a woman in Romania. 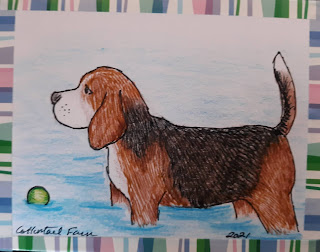 Here's  a card I made last week for a woman whose user name is something like "beagle mama" . I'm no artist. That's supposed to be a dog. I ran out of space to draw dog legs, hence the water. We had beagles growing up. When we lived at the gun club my dad always had a dog for running rabbits. They were the best dogs. Once we had a litter of pups, I'm sure all of them had hunting homes waiting for them in advance. They were the cutest things, little velvety ears and round milk bellies.  My sister and I used to pile them into a baby buggy and push them around the yard. 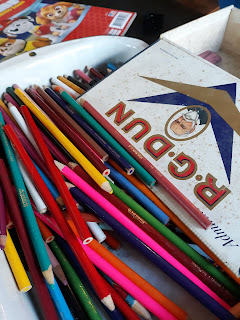 Speaking of arts, the kids have had all of the crayons taken off them. Mr. A loves nothing  more than to color on the walls and I'm just done with it. They still have colored pencils, paints and markers. And are churning out such masterpieces as this: 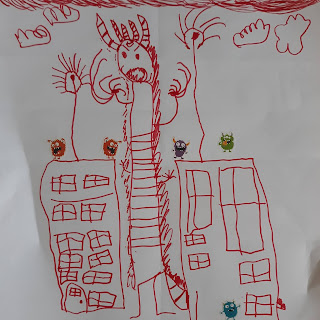 Which is great. But then there are these: 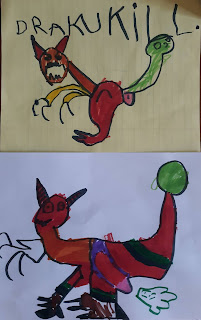 I mean, come on. What the hell am I supposed to do with this? 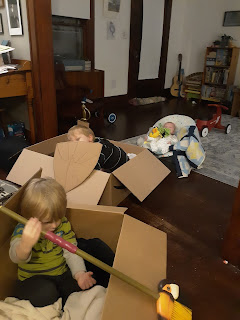 Both of the older kids fell asleep in cardboard boxes tonight, pretending to be pirates.
And for anyone still reading, here is a video of geese eating breakfast.  Geese feel very muscular and velvety when you pet them. I love them and I hope they start laying soon.
I have no idea why this isn't working. Here's a link.
Posted by Cottontailfarm at 9:38 PM