Cooking with volcanoes & other Postcrossing adventures 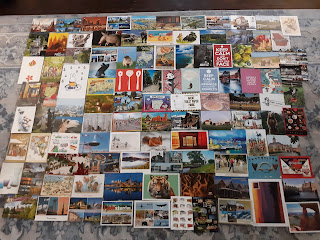 Here are the 105 postcards we've received since joining Postcrossing when the pandemic started. They have been a welcome window into the world during a time when we haven't even left our own county for nearly a year. It's been very touching to me to read the messages of total strangers. Most tell stories of their lives and the places the live. Some send extra cards for the kids, paper goods from their hometown (playbills, menus, small calendars). Some have asked for prayers for sick family. Many, from around the world, have encouraged us to vote in the election. We have been congratulated on our new baby. Almost all have wished us good health during the pandemic. 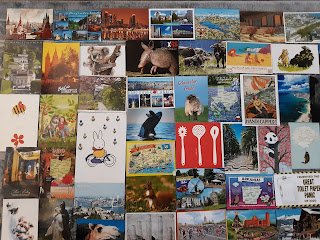 In this picture we have a hand drawn card from the Netherlands (Miffy the bunny), an Ikea ad card from Taiwan (red with kitchen tools) the home of Beatrix Potter, cards from the Olympic Peninsula and Our Lady of Aparecida (the Patron Saint of Brazil). The card of the lady rowing a boat in rough waters was from a woman who just recently became a U.S. citizen after 42 years in America. The Winnie the Pooh card came from a woman who lives near forest that was "home" to Christopher Robin. The armadillo card came from lady in Texas who told a story about a man who accidentally shot himself while shooting at an armadillo (they both were fine). 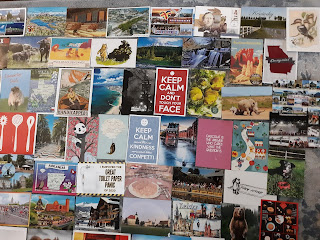 Here we have some pandemic cards, a couple of fabulous "maxi cards" (cards with matching stamps on the fronts) and a card written by a dog. There is a card in the top row from the Aland Islands celebrating World Postcard Day.  The card with the rainbow is from Altotting, Germany, a religious pilgrimage site.  The card above it is from the Netherlands and yes, sorry, the sausages picture makes me giggle. 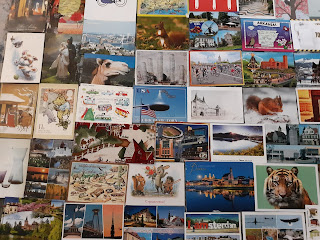 Here is a lamppost from Hershey, PA. The bicycle card comes from a doctor in Russia who has 6 cats "all were homeless".  The homemade fabric card came from a quilter in Germany. 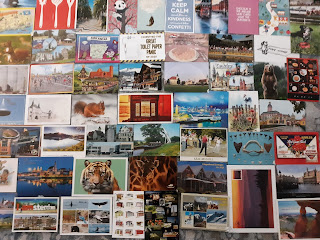 Here are 2 more maxi cards and a tiger from the Frankfurt zoo. The shark teeth card came today and was very exciting as Mr. H and I were looking at our sharks teeth last week, now we can identify them.
Directly to left of it is this card: 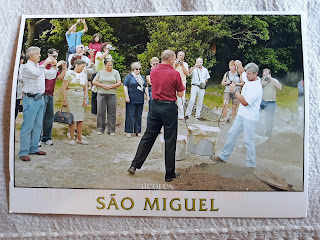 Which on the surface looks like a typical US clambake or camp fire meal.
But read the back! 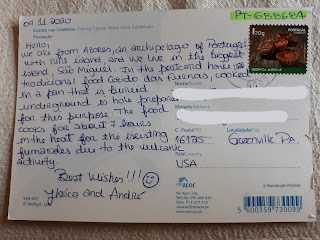 They are cooking with volcanic heat! Volcanoes, people. You can read about the meal they are making HERE It's a delicious sounding stew. But let's be serious, who cares what it tastes like when it has that kind of "wow!" factor.  I can't even figure out the convection setting on our oven.
Postcrossing is an anonymous correspondence and I won't ever know more about the writer's lives then they share on the cards but it has made the world seem larger and smaller at the same time.
Also it is nice to find something else in the mailbox besides bills and junk mail. And can't we all use a bit of that.
Posted by Cottontailfarm at 9:17 PM