Remember when I was going on about life being pure adventure? You never can tell. 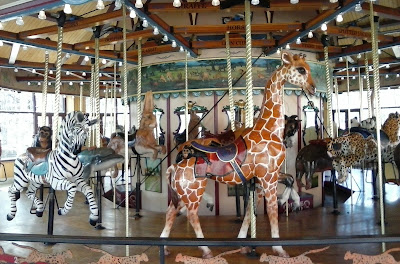 Is it possible to ride a carousel and not think about this scene from Strangers on a Train?

It was really nice earlier in the week.  Wednesday morning we decided to take a family trip to the Erie Zoo. About halfway there it was obvious that the car battery was on the way out so we pulled into Autozone to buy a new one and have it installed.  I'm glad that hiccup happened in the gas station parking lot and not, say, at the rest stop on 79.  So our trip up took longer than expected but when we got there it was perfect, there were all of about 10 cars in the parking lot and we had the place just about all to ourselves.  Most of the animals were out as well. 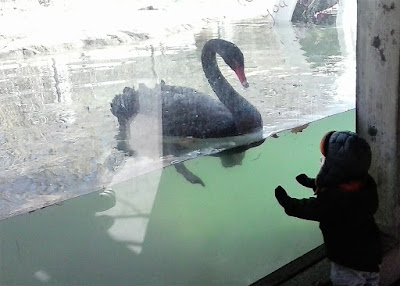 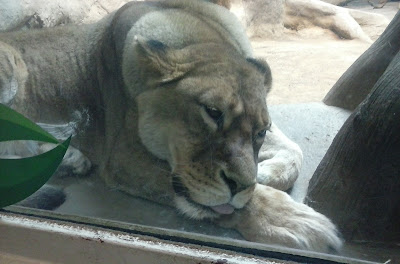 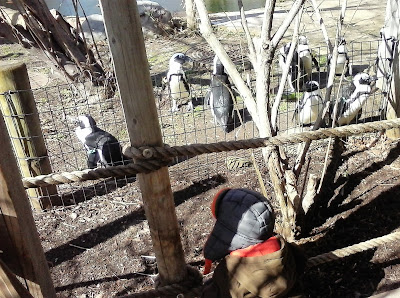 I was sorely tempted to stuff one of these penguins in my pocket - they can live with the ducks, right? 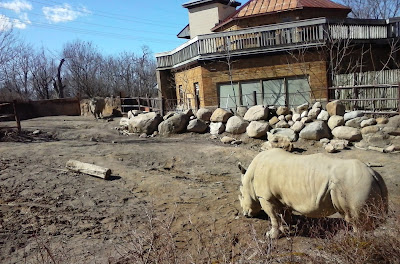 The southern end of a north-bound rhino.

After the zoo trip we took a drive around Presque Isle to see if any swans had started migrating in.  I've never seen it so windy on the peninsula. 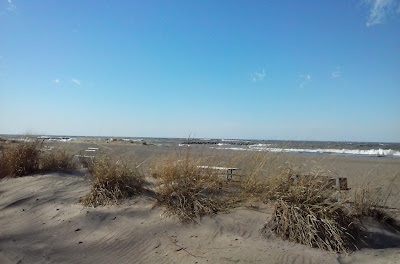 There were huge waves hitting the beaches and breakers and sending spray onto the roads on the bay side.  We drove through a sand cloud at one point.  If there were any swans they were hiding.  I don't blame them.

The car was blown all over the road on the way home then we had a major windstorm that night and lost power around 5 that evening.  A tree across the street fell, ripping out power lines and knocking over the pole which then fell across the road.  Some grass caught on fire.   We didn't know all that at the time - we just knew that the power company and police showed up - and left soon thereafter without restoring the power.  That's not a good feeling.  I filled up some pans of water while I still could.  We lit candles, had tuna and crackers and wine for dinner and went to bed early.  The next morning we had breakfast out and took the little guy to my dad's (heated!) house while I cleaned out the refrigerator and freezers and moved all of the perishables across town to his place.

There was a time not too long ago when I was a bit of prepper.  It was the result of a perfect storm of my mother's cancer and oh, the Ebola scare.  Things seemed out of control and I had enough canned goods and water in the basement to last us for weeks at least. I had a kit in the car, which I actually needed to use once, that contained everything from fire starters to water tablets to antibiotics and reflective blankets.  I've gotten away from that totally and when the power went out we were woefully unprepared - as in the lantern didn't even work.  Sure we had canned food but no way to heat anything. And about a half gallon of water.

We have a child now which just magnifies how irresponsible I felt.  People talk about prepping like it's going to be some utopia of baking bread and sowing vegetable seeds - I call bullshit.  In most situations it's about heat, food and clean water.  Which we barely had.  Our power came back on the next day - but what if it hadn't?  This is not unreasonable in rural areas - my husband and I once went over a week with no power, ten days I think.  We were in a rental at that point which had a pond (for flushing the toilet) and a wood stove.  It was summer and we grilled all week.  But I digress.  It's not crazy to worry - anyone remember that cluster that was post-Katrina? Or 9/11?  Or that year the city of Buffalo was snowed in for a week - my mother was getting IV nutrition when that happened and if we had lived there - she would have literally died.  Things do happen where people are quite truly on their own for days or more. Good luck.

So, I'm going to be preparing again on a reasonable scale.  So that next time this happens I can say "meh" shrug my shoulders and set up the camping kitchen out on the front porch.  It's not unreasonable to make sure that we have extra lanterns, water stored, easy to make meals and propane for the camp stove.  Shelf-stable milk for the little guy.  A couple of buckets of water for the poultry. That kind of things.  As far as heat goes - we have no fireplace or woodstove so we'd still be kinda screwed there but at least we'd be fed.

Speaking of seeds, I did start some this week - alpine strawberries, leeks, shallots.  So that is on schedule.  I haven't gotten meat chicks yet - but I thank god that I didn't have a brooder of peeps to worry about when the power went out - so maybe that's for the best.
Posted by Cottontailfarm at 12:51 PM